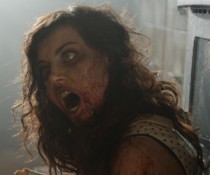 Low budget film making where film making risks is now being taken. Movies with huge budgets tend to have too much to lose if they try to do something different and fail. We are talking hundreds of millions of dollars at stake here. Indie film Life After Beth takes the basic idea of the zombie and puts a slightly different spin on it.

Beth (Aubrey Plaza) has died. She was hiking alone and ended up getting bitten by a snake and dying. Her boyfriend Zach (Dean DeHaan) is distraught. He has difficulty in come to terms with the loss, more so because Beth was on the verge of breaking up with him. Zach finds a measure of comfort in Beth’s parents (John C Reilly and Molly Shannon). They are in a position to console each other and find that their shared grief is actually a support. When Beth’s parents suddenly stop talking to Zach, he is troubled. They won’t answer the door or return his calls. When he finally confronts them, he gets a huge surprise. Beth is alive. She is not entirely the same Beth he remembered. She does not remember her death or why she has a sudden craving for dirt, hanging out in the attic and smooth jazz. It turns out that Beth has returned from the dead. At first things are reasonably sane, but it soon becomes apparent that things in the whole town are changing.

The director, Jeff Baena, stated that he went down the low budget route for the simple reason that he would retain control over the project. You can see why he did it. The film is a unique take on the zombie mythos and it would have been nigh on impossible for the idea to make it to the screen. It is a quirky and refreshing take on the genre. The undead are sentient here and have no concept of their demise. They act as if they are alive and only have a few quirks.

The principal role of Beth is handled very well by Aubrey Parks. Her trade mark deadpan delivery is spot on for a teenager who doesn’t relate to the adults in the house and is wrapped up in her own world. Counterbalancing this is Zach. Dean Dehaan provides a nervous, jittery character study. He goes from grief to shock which leads to terror rather quickly. His personality is totally believable and his actions do not seem odd or forced in any way.

This is a small film with a lot of very well known actors. All the roles are cast with people you would associate with higher budget fare. The main stars and the director obviously called in a number of favours to assemble the cast. It works well as there are no bad performances even in lesser roles. The script and direction are of a high enough standard to allow the film to flow naturally even if the pacing seems a bit sedate at times.

Although it is primarily a comedy the film is played completely straight by the performers. This adds another level to the enjoyment of the story. The scenes with Beth parents are especially effective with John C Reilly on top comedic form. There are a couple of really delightful set pieces where Beth starts to go off the rails. The situations are totally absurd and in other hands could have fallen completely flat.

Overall a quirky and highly enjoyable derivation on the zombie comedy genre. Recommended.