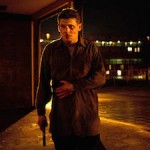 It’s 1971 and the Troubles in Northern Ireland are at boiling point. The sectarian divide breeds violence which creates a hostile environment. Gary Hook (Jack O’Connell) is a young British soldier whose regiment is deployed to Belfast. While assisting the notorious Royal Ulster Constabulary on one of their assignments, they incur the wrath of the locals who are there to give the soldiers their own special welcome. Before long a full scale riot breaks out and the army are forced to retreat. In the commotion, Hook and another solider are forgotten, both of them left to the wolves. While the baying mob savage the two men, a woman comes to their aid and appears to be salvation as she strives to talk some sense into the aggressors. In the confusion, Hook finds himself on the run after his comrade is executed by a member of the Provisional IRA. Stranded and disorientated Hook must find a way off the streets and back to his barracks. With no weapons and no allies, he will soon learn that not everything is black and white.

’71 is not a comfortable film. From the first conflict, director Yann Demange cranks up the tension as Hook is chased through streets and houses by his would be assassins. The film keeps you on a knife edge, even when Hook appears safe as the threat of danger is never far away.

Demange and writer Gregory Burke handle the polarising Troubles sensitively. There are good guys and bad guys on both sides of the struggle; there are no generalisations. No side is demonised. It’s the right call to make as the bloody and complicated history of who is right isn’t explored, the focus instead being left on Hook, the story of a young soldier who just wants to survive. Youth is a particular theme of ’71 as the ages of the combatants  are put to the forefront. The soldiers on both sides are young boys, and more often than not it’s these boys that are the casualties of this war.

O’Connell continues to show why he’s fast becoming one of the UK’s finest actors with another sublime performance. He plays the part with a subdued intensity and a constant terror in his eyes. He isn’t afforded the luxury of relaxing and as a result, neither do we.

No scene is wasted as every shot and plot point is used to benefit the story. The sub-plot that bookends the film appeared a little disjointed at first but in reflection it made sense. It also provides some relief after such a harrowing tale. ’71 won’t be for everyone, but if a well paced gritty thriller is for you then you’ll struggle to find a better example this year.