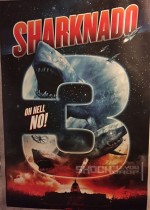 It seems like only yesterday that news of the first Sharknado was released. Its cult following translated to profit for production company the Asylum which naturally meant a sequel was on the cards. (Un)surprisingly, Sharknado 2: The Second One proved to be more popular, becoming the highest premiering film on the Syfy channel. Do we really need a third one? Well, if you’re a fan of the last two like then the answer is obviously yes.

Anthony C. Ferrante returns to direct the third instalment in his trilogy which moves the freakish weather incident onto the entire east coast of the United States. Plot details are scarce at this point however the poster suggests that Washington will play a huge part and that space hasn’t been ruled out as a setting either. It’s unknown what cast will return and Daniel Radcliffe’s cameo has yet to be confirmed.

Will it be as popular as the previous entries or will it turn out to be Ferrante’s Godfather: Part III?

Sharks in space though, you have to admit that does sound kinda cool.