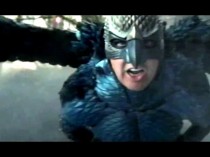 In a very neat marketing move for the forthcoming Birdman movie, instead of getting treated to another trailer which teases the action, we get to delve into the back story of the Birdman. The long-lost trailer to Birdman Returns from 1992 is presented in glorious VHS quality replete with an authentic nineties voice over.

We get a glimpse of the origins of The Birdman and how he tackled the bad guys back in the day in what is a really good parody trailer. It is always good to see a bit of imagination in a publicity campaign for a movie and this certainly peaks the interest ahead of the movie hitting the screens on the 2nd of January 2015.

The actual Birdman film stars Michael Keaton as an actor trying to make a comeback in the theatre after walking out on the franchise that made his name and led to a breakdown.