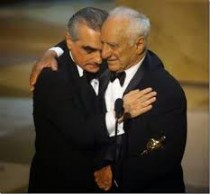 Elia Kazan is one of those film makers whose name may not be instantly recognisable to many, but it is almost guaranteed that they have seen at least one of his films. Responsible for such classics as East of Eden and On The Waterfront, he was a superb film maker. In the documentary film A Letter to Elia his life and work are examined in some detail.

The film begins with his upbringing and how it informed his films. Building on his youth and the background of his family he channeled these influences into his work on screen. After a cinematic education acting in film with some low budget movies in the late 1930’s, he found his own voice on the stage directing the Tennessee Williams classic A Streetcar Named Desire. He was a founder member of the Actors Studio which helped to mold some of the finest acting talent of the last fifty years. Through a series of low budget movies in Hollywood, he developed his style which culminated in the screen adaptation of Streetcar. With the success of the film, he went on to have a glittering career which found him working with some of the top stars of the day.

The film is a very personal tribute to the director by his friend Martin Scorsese. He holds an obvious love and admiration for the man and cites him as a major influence on his own career. He focuses on several of Kazan’s best known works. In the examination of On The Waterfront, he goes into depth on the set up of the scenes and the attention to detail in the characterisations. Kazan specialised in social and domestic issues that were relevant for the movie going audience of the time. These were the building blocks for Kazan’s style and singled him out as a unique movie maker.

The same treatment is then given to East Of Eden. This film was the breakout role for James Dean and reinforced many of the themes that his previous work covered. Scorsese goes into significant detail, highlighting Kazan’s developing style with his framing of the shots and the development of the characters. The depth he goes into is informative and really fascinating for fans of both directors work and for anyone interested in the mechanics of storytelling on the big screen.

Kazan’s life was not all plain sailing and critical success. He was a former member of the Communist party and was called to appear before the House committee on un-American activities. At these hearings, he named several people he believed to be communists which brought him into conflict with the more liberal elements of the Hollywood community. This would be an issue which followed him for the rest of his life. He was un-repentant as he saw it as the lesser of two evils for himself. The film does not hold back away from this which is to its credit. To ignore something that shaped the man and his career would have lessened the impact of the documentary.

Overall, a compelling and thorough examination of one of the greats of cinema. Recommended