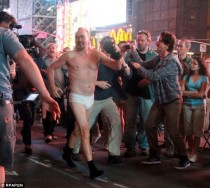 As soon as the jazzy musical intro begins, you can tell that Birdman is a film that is going to mash it up a little.  Michael Keaton plays an aging actor, Riggan Thomas, once a massive success as the iconic superhero, Birdman, now a massive failure at life.  Years after his final Birdman film, his career and his personal life have suffered from his ego.  We join him as he is about to start the previews of a Broadway adaptation of the Raymond Carver story, What We Talk About When We Talk About Love which he is producing, directing and starring in.  He has put all of his money, energy and hopes into the production while the people in his life including, daughter Sam (Emma Stone), best friend and lawyer, Jake (Zach Galifianakis)  ex-wife Sylvia (Amy Ryan) and girlfriend Laura (Andrea Riseborough) make unsuccessful attempts to connect with him. Yes, there is more than a touch of irony there.

The film flits between moments of spectacularly absurd humour and genuinely touching human interaction.  There are comedic episodes that it is impossible not to laugh out loud at, and Edward Norton’s performance as Mike Shiner makes you simply want to take a bite right out of him, it is so delicious.  Norton has some of the best lines and in fact the best scenes in modern cinema, it is no wonder he relishes them, “I don’t need the script, just feed me a line”. Galifianakis is for once subtle in his role, but as usual his timing is impeccable.  Stone is utterly believable as the trashy, disillusioned daughter just out of re-hab.  Stone and Norton have chemistry and some excellent dialogue to share.

Keaton as Thomas wanders through the theatre and the film genuinely astounded at the events that take place around him – truly a man who cannot understand the motivations of other people or quite how the random events in his life seem to unfold.  He is desperately trying to cling on to some kind of control in his life, but is failing miserably, choosing to listen to his ego which gives him false ideas of grandeur and power over the universe. Thomas is not a particularly likeable character;  he is self-obsessed, lost in his own world; dangerously hanging in the balance between enlightenment and insanity and completely unable to engage with people in the right way, at the right time.  I have to say that the one thing I was slightly disappointed with was the character of Riggan Thomas. Keaton is neither manic nor touching enough to truly stand out among the other actors who all manage to make their characters seem real, interesting and hilarious.  Keaton could have had some real fun with the role, but instead took it too seriously, ironically like his character.

I am glad to see that Inarritu can handle comedy expertly.  He has a talent for capturing the absurdity of life and our inability as human beings to comprehend the world around us.  The phrase, “You couldn’t write that shit” kept coming to mind – evidently some ingenious Mexican has and the script deserves as much acclaim as any other aspect of the film.   Remarkably New York somehow feels small and suffocating – most of the story takes place inside and around the outside of St. James’ Theatre and when Riggan does venture outside on Times Square – he is nearly naked and the people around him are all laughing at him making the viewer want to quickly get back into the theatre with Keaton.

Part of the problem with Thomas is the presence of the alter-ego of Birdman.  It is incredibly difficult to pull off the presence of an alter ego.  The only time I can think of it really working is in Fight Club (horrifying realization) and True Romance (so cool nothing could ruin it).   I am afraid I don’t think Inaturro or Keaton have managed it.  It made me feel uncomfortable and took something away from the quality of the script and acting in other parts of the film.  I did not feel I was watching the film through Riggan’s eyes the whole time, so the dream sequences seemed out of place.  I was equally disappointed with the end; it was unsatisfying and should have ended one or two scenes earlier.

That said, as a director, Inarritu is wonderfully pushing the boundaries of cinematic style with his filming technique.  He has almost ditched editing altogether and his aim was for the movie to appear as though it is one long shot (literally as well as figuratively).  I had read about this before going to view the film, but my friend (a normal cinema goer) didn’t notice.  He uses different techniques such as a panning shot from the balcony to the stage to mark the passage of time and a shot of a city apartment as the light in the sky changes from night to day to mark the end of a scene. On reflection, I can’t help thinking that this was a conscious decision to hold two fingers up to the rules of film making and it takes real balls and great skill to pull it off.    He pulls it off expertly, and seamlessly, as the ignorance of my non-film critic friend proved.

Inarritu also manages to recapture on film those little moments of awareness that somehow make life seem worthwhile, when you notice how beautiful it all is despite the depravity and chaos around you, for example in the effect the light has on particles of dust floating around the room. This and the hand held camera style of shooting often makes the viewer feel like somehow they have managed to become a spectator in someone’s real life.  Inarritu finds a balance between the fantasy of cinema and the reality of life which is a rare feat.  He is establishing himself not just as a talented director, but also as an artist who spends time examining his own psyche and the world around him on film in a way that allows the audience to be involved.

On the surface and while I was viewing Birdman, it seemed to be much lighter than Inarritu’s previous work, but on reflection, I can’t help but feel that in fact it is a deeply cynical, darkly scathing comment about the movie and theatre industry.  The actors for once are real people instead of personas but their desperation to feel a sense of self-worth through public adulation is pitiable, particularly because it is at the expense of their personal relationships.  If they just learned to connect with the people who are actually in their lives, they might discover true self-worth instead of listening to their ever present egos.

I am certain this is not Inarritu’s best film, and I would be disappointed if it was, but it was extremely funny and although it didn’t always hit the mark, there are moments of genius.