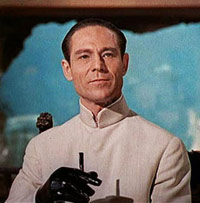 With the release of SPECTRE, the twenty-fourth James Bond film later this year, it seems like an opportune moment to look back at how the world’s most famous spy was first presented to the movie going public. Made in 1962, the film marked the start of a franchise that, through many highs and lows, is now more popular than ever.

Dr. No was chosen as the first book to be adapted for the screen despite the fact that it was the sixth novel in Ian Fleming’s series. It was considered at the time that the book lent itself very well as an introduction to the world of Bond. The story itself concerns a mystery. Stangways, MI6 station head in Kingston Jamaica, disappears with foul play suspected. MI6 despatches James Bond to the island to investigate. Bond discovers that the station had been working with the CIA to find out why the US space program’s rocket launches were being disrupted. A mysterious figure Dr Julius No is the prime suspect. Bond, with the aid of a local fisherman, sets out to get some satisfactory answers.

The film serves as a very good introduction to the character of Bond. He is seen as a fully rounded agent who is confident in his ability and clearly very comfortable in his own skin. On one level, he could almost be seen as cruel. As a double 00 agent, he has a licence to kill and on a couple of occasions in the film he does so. At one point, he kills an unarmed man even though it would have been easy to spare his life.

As with every actor who is confirmed in the role of Bond there was a certain amount of doubt over the casting of Sean Connery. Many known actors were in the frame for the role including a young Roger Moore and when Connery was selected by the producers they had a bit of a fight on their hands convincing the studio that he could handle the role. Fortunately they were very persuasive and Sir Sean was more than able to rise to the occasion. With his skill as an actor and the help of director Terence Young, the character of the suave spy was created.

As the film was the first adaptation the studio was very cautious in its funding of the movie. It had a limited budget of just over £1,000,000. The result of this is a film, unlike later installments, that has only two locations. It is to the benefit of the film as it is stripped back and concentrates on the story. There are surprisingly few action set pieces with only the final conflict in Dr No’s lair that could be considered to be a real action scene.

It is a film of introductions. In what is now considered to be an iconic moment in cinema, we are introduced to Bond at the card table. There are few establishing shots with only a glimpse of Connery before he is introduced with the immortal ‘Bond. James Bond’ line as the Monty Norman theme tune kicks in. Similarly Honey Rider (Ursula Andress) gets a memorable intro as she emerges from the sea in a white bikini.

Dr No is given two introductions. The first is a masterful scene that establishes the character as a sinister force. He has summoned one of his men to explain a failure. The room he enters is vast with a single chair under a dome which spills a lattice of light into the room. We only hear the voice of Dr No and this sets up the character before we actually see him on screen. It is a full 100 minutes into the action before we see the man himself. In the flesh, he is even more imposing with his metal hands and his supreme arrogance.

In a neat turn the audience, and Bond himself, is introduced to the concept of SPECTRE, the Special Executive for Counter- intelligence, Terrorism, Revenge and Extortion. This organisation is new to MI6 and unlike the conventional enemies of the time is not bound by national boundaries. It would form the basis for some of the major conflict within the world of Bond and will again feature heavily in the twenty fourth film due for release in November 2015.

Overall, this film was a bit of a surprise. I hadn’t viewed it for a number of years and it was the most compact and subdued of all the Bond films. It stands up very well as an action film fifty three years after its initial release. Recommended.