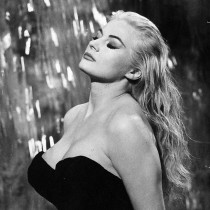 It is with sadness that we note the passing of the Swedish screen star Anita Eckberg at the age of 83. It was announced that, after a series of illnesses, she died in Rome on Sunday morning. In 1960 she became an instant screen icon in the role of Sylvia on the Federico Fellini film, La Dolce Vita. The scene of her wading into the Trevi fountain followed by Marcello Mastroianni ensured her place in movie history.

She was not able to eclipse that moment but did go on to have a successful Hollywood career starring opposite John Wayne, Frank Sinatra and other leading men of the day. In later years she spent most of her time in her adopted city of Rome and was still active in Italian cinema and television productions.