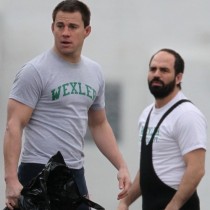 As we enter into awards season, a quick look through the current releases confirms what equals quality drama these days, and that is real life. There are the dual biopics of Stephen Hawking and Alan Turing in The Theory of Everything and The Imitation Game respectively. Throw in Selma, the story of Martin Luther King’s voting rights marches, American Sniper’s flag waving propaganda and a look to the past with Mr Turner and the nominations list is stuffed to the gills with dramatic representations. It makes you wonder if a good old original story is possible in Hollywood nowadays.

One of the more successful films to fall into this category this year is director Bennett Miller’s Foxcatcher, the story of Olympic wrestling champions, The Schultz brothers and their fateful allegiance with John DuPont, the heir to the DuPont family fortune.

The events of Foxcatcher are perhaps more well-known in American than across the rest of the world, and so interestingly the film has almost been marketed as a mystery over here. The trailer and subsequent reviews have stopped short of revealing too much, which benefits the film considerably. At times, it is hard to see where exactly it is moving towards. DuPont takes in Mark Schultz following his success at the 1984 Los Angeles Olympic Games and develops a relationship as a coach and mentor. In these stages, the film touches quite closely on similar themes as Steven Soderbergh’s 2013 film Behind the Candelabra. Schultz is portrayed as slightly lost, and welcoming of the attention of the older DuPont. The film moves away from the initial focus on Schultz as a wrestler and addresses his need for attention and acclaim away from his brother,Dave Schultz.

However, it is with the introduction of the older brother, Dave Schultz, into the DuPont family residence that the film enters into more surefooted ground. There is a distinct ‘love triangle’ of sorts at play here, as DuPont sees himself pushed out of the brother’s obvious bond for each other, and a more serious focus on the goals as wrestlers. DuPont from herein becomes a spectre, haunted and brooding on the side-lines building to a shocking and awful finale to the story.

As a story, it’s not hard to see why it has made its way via Mark Schultz’s book Foxcatcher to the big screen. The events covered in the film shocked not  just the world of wrestling but the whole of the US. The DuPont family were at one time the richest family in America. On the grounds of salacious drama, the film scored highly.

In a year where the majority of films have been eclipsed by the acting performance contained within, Foxcatcher is a prime example. The most obvious example is seeing Steve Carell’s transformation into John DuPont. He inhabits the role, albeit with the aid of some impressive prosthetics, with a committed intensity which betrays his roles in some questionable comedies over the years. He is more than ably supported by Mark Ruffalo, in a quieter role as Dave Schultz and Channing Tatum as Mark Schultz.

While both Carell and Ruffalo have received Oscar nominations in recognition of their roles, Tatum has surprisingly been overlooked. However, his performance is perhaps the most impressive. He anchors the film with a restrained, emotive physicality as the younger of the Schultz brother, unable to fully express himself either in his role as a brother, nor the plaything of a rich bully.

Ultimately, though the film must be judged as a whole and this is where sadly Foxcatcher falls short. A set of great performances is not however backed up by anything more than a film which offers a peek behind the curtains of one of American’s great sporting tragedies. There is no message here, and nothing to be learned by an audience. This is a sad, slightly depressing tale of unfilled promise curtailed in its prime, which while told in perfectly muted colours and tone, does not provide the sum of its undeniably impressive parts.

One thought on “Foxcatcher”