To be honest I wasn’t really looking forward to this. The trailer had something about it that virtually screamed here are all the best bits of the movie. Trailers are increasingly guilty of this giving away pretty crucial scenes from the third act which can spoil your viewing pleasure. Thankfully Kingsman was not subject too much to the phenomena. I only noted a two second clip that in the context of the preview gave nothing away.

Based on the Mark Miller comic book , Kingsman: The Secret Service tells the tale of a private and very resourceful group of gentlemen spies who are tasked with dealing with all sorts of danger. When one of their ranks is killed in action a suitable replacement has to be found. It is one of the responsibilities of each of the group to nominate a new member. Galahad (Colin Firth) chooses Eggsy (Taron Egerton) as his candidate. Many years before Eggy’s father save Galahad’s life and now the debt is being repaid. At the same time a shady figure (Samuel L Jackson) is setting up a very unique scheme to solve the world’s climate problem. Standing in his way is the Kingsman organisation and it becomes his mission to take them out of the picture.

The reason this film works so well is the balance it finds between action, drama and humour. It has a very stiff upper lip sensibility about it with the Kingsman organisation hiding under the guise of a gentleman’s tailor shop. The agents are all well spoken, upper-class men of style and poise. Into this comes the character of Eggsy who comes from the other end of the spectrum. This is the essence of the story and everything revolves around the conflict between the establishment and the street.

Colin Firth is a revelation in this. He can play the stuffy British character in his sleep and has a comic sensibility about him from the likes of Bridget Jones. What he shows here is a genuine talent for action. It has been noted that he undertook a grueling six months of training in preparation for the role. It shows. He is completely bad ass in the fight scenes. There is only so much that the effects can add to a fight and in line with recent action films the stars here are in close up throughout the scenes and are very active. 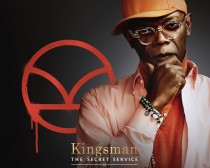 Samuel L Jackson looks like he is having a great time in his role of the principal baddie. His character is a super nerd. In line with the foibles and mannerisms of most of the Bond baddies he has a ridiculous lisp and an aversion to the sight of blood. To complete the look he has a femme fatale sidekick who has stiletto sharpened running blades in the absence of legs.

It is a little like a cross between James Bond and Kick Ass. From the training facilities located in a country estate and the plethora of gadgets including the umbrella gun to the evil guys lair being concealed in the side of a mountain, there are numerous references to the gentleman spy of old.Thee is a few digs to the very blatant product placement in the Bond films with screen time given to McDonalds and Guinness in place of Caviar and martinis. The ultra-violence makes direct reference to the Kick Ass style of presentation and the often hilarious comedy, designed to shock as well as amuse is from the same source.

Once again, Matthew Vaughn has directed a stylish and individual looking movie. It has a gloss and sheen to it that fit perfectly with the story. It’s nice to see shots of London without Big Ben or red buses everywhere. In a very well paced two hours, the film switches between action set pieces and the more dramatic elements. Unlike many films, the drama drives the action rather than the other way around. Jane Goodman’s script is the glue that keeps the whole thing together. The main characters are very well drawn and immediately interesting. For instance, we first encounter Galahad in the pre credits scene. Here we get an idea of the man in under two minutes. We see his style, his abilities and his personality. All this while he is interrogating a suspect!

2 thoughts on “Kingsman: The Secret Service”