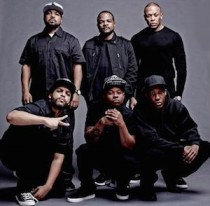 In the late 1980’s, NWA (Niggaz Wit Attitude) were the group that defined an entire generation. Five young black males from the notoriously violent city of Compton in California came together and shook the whole music world with their unique form of angry Hip Hop and revolutionary lyrics. They popularised an entire genre and turned the world media spotlight onto an element of society previously spurned by the system.  So groundbreaking were they that they are credited as being one of the most influential components of the Gangsta Rap scene and even one of the most important bands in the history of Rap.

Felix Gary Gray takes the reins in directing this new biographical Drama charting the story of how the group got together to become one of the biggest Rap groups in the world despite the challenge of growing up surrounded by the poverty and violence so prevalent to the ghetto. Working closely with Dr Dre and Ice Cube, two of NWA’s founding members, Gray looks to be giving us an honest portrayal of life in Compton at that time and the struggles each member faced.

O’Shea Jackson Jr, Ice Cube’s son, is cast to play the role of his father, with Dr Dre and Eazy-E played respectively by Corey Hawkins and Jason Mitchell, and judging by the trailer they look to be an excellent selection.

NWA were notorious for their brutally honest lyrics, rebelling against authority and hatred towards the police and you should expect a lot of that in this forthcoming movie. They were the voice of a generation which at that time wasn’t getting heard: young, poor and black, and they made sure, through their music, that people stood up and took notice. A must-watch for fans of the genre but shouldn’t be dismissed by those not into the scene as we’re promised a melting pot of action, drama, rebellion and a whole load of attitude.

Due for release August 2015, you can watch the trailer . Please note this is the red band trailer and will not be suitable for viewing in a work environment.