Ian Fleming’s James Bond is the longest running franchise in cinema history. Beginning with Sean Connery as Bond in 1962’s Dr No and most recently starring Daniel Craig in Skyfall (2012), everyone’s favourite secret agent has fought off countless villains, saved the world several times and bedded a string of beauties. Despite the longevity and evident appeal of the British spy, success has by no means come easy or remained constant. A total of six actors have played Bond thus far. So who comes closest to capturing the essence of James Bond?

Fleming’s first novel, Casino Royale, was printed in 1953. Like most adaptations, what is in the film is not how it is in the book. It is a dark, brutal work – nothing like the tongue-in-cheek innuendo of Roger Moore’s Bond. The most important thing to take from the novel is that, in spite of the cutting one-liners and virility displayed in the films, Bond is a killer. A cold, detached killer. As a colleague says to him: “But don’t let me down and become human yourself. We would lose such a wonderful machine.” This sentence alone provides a stark contrast to the suave ladies man we are familiar with. His double-0 status does, after all, give him a license to kill. Such emotional detachment from death must leave its mark on a man. Casino Royale describes Bond as having a “scar on his cheek” and a “slightly cruel smile”, none of which are present in the initial series of films. A more hard-edged Bond only really emerged with Timothy Dalton and was rediscovered in Daniel Craig. Arguably, The Living Daylights (1987), License to Kill (1989) and the revamped Casino Royale (2006) come closest to depicting Fleming’s original imagining of the spy, being the most violent and brutal of the films. The novels were not adapted in order; Dr No was in fact Fleming’s sixth effort, published in 1958. Both film and book alike concentrated on the (very real) threat from the East – the villains Bond faced were often Russian or Chinese – as the Cold War raged on. But the modern day Bond has graduated from such out-dated notions. Gone are the days of snarling villains stroking white cats; international terror plots are now the order of the day. 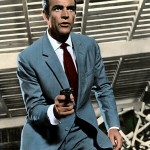 The perception of Bond has altered dramatically in accordance with the actor playing the lead. Moreover, the more modern films are increasingly violent in order to compete with other such summer blockbusters or espionage thrillers such as The Bourne Trilogy. Bond is intrinsically British; a well-educated man appealing to all classes of people with a desire to defend the Empire. The first James Bond, Sean Connery, was charming and well-dressed but could be equally ruthless to both men and women. If anything, he planted the idea of a tall, dark-haired Bond firmly in the minds of the cinema-going public. This image would prove most difficult to erase in the event of the blonde Daniel Craig taking on the role. Roger Moore’s style was entirely different to Connery’s and, owing to this, the films lost a ruthless, arrogant Bond and found themselves a light-hearted replacement prone to innuendo. Moore’s performances gradually felt like they were being played for laughs. His Bond career began in 1973 with Live and Let Die and ended in 1985 with A View to a Kill. Moore was 58 when he left the role. A British spy with liver-spotted hands does not exactly inspire peace of mind. Australian model George Lazenby had one and only outing as Bond in On Her Majesty’s Secret Service (1969), displaying a more romantic and sensitive side to the super-spy. The less said about that, the better.

A fresh start was granted with the arrival of Timothy Dalton in 1987. Certainly, he is charming and handsome but, more crucially, he retains the level of detachment necessary to portray a killer. Thus far, License to Kill (1989) has the highest BBFC certificate, rated 15. If there was talk in recent years about Craig’s Bond returning to the dark nature of the novels, it would seem Dalton got there nineteen years earlier. His Bond is angry, and potentially dangerous. The gloss, visual gags and one-liners were removed and replaced by the raw menace of the spy. Bond has his license to kill revoked as he attempts to break into the seedy underworld 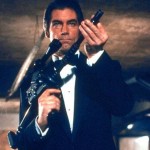 of a drugs baron. Sanchez – the baron in question – is prone to fits of murderous violence and is aided by the equally sadistic Dario, who uses his favourite flick knife for a number of cruel and incredibly graphic attacks. It is credited as having great realism, and is arguably the most violent. It is also the only Bond film to feature a rape. Most importantly, Bond is plunged in to a world where there are no rules, no clear cut sense of who is ‘good’ and who is ‘bad’. Bond himself acts a rogue agent. Dalton gave Bond the steely stare and quietly threatening determination that was severely lacking in the previous efforts. License to Kill is the ultimate expression of Ian Fleming’s Bond. It is deeply unfortunate Dalton did not stay in the role for longer.

Sadly, it would seem that old habits die hard. When Pierce Brosnan was unveiled as the new Bond after a six year hiatus, the franchise slipped back into the old formula. And, as the millennium was fast approaching, the decision to swamp the films with a huge number of gadgets was taken. Again, this had no place in the original novels. Bond did all the hard work himself and was able to fight with his fists; he need not rely on the latest shiny metal toy that was presented to him. The storylines and, indeed, the villains, became increasingly ridiculous. The films became farcical and irrelevant.

After another break of four years, Bond was reborn. Blonde haired, ‘serious’ actor Daniel Craig emerged from the water in a tiny pair of blue trunks, with a piercing stare and menacing smirk that said: This time, things will be different. The studios wanted an edgier Bond, closer to the novels. A back to basics approach. Revamping Bond – right down to Craig’s refusal to utter the words “shaken, not stirred” – was a calculated step to defeat his nemesis, Bourne, at the box office. Casino Royale is certainly a very violent, fast-paced thriller that depicts how Bond achieved his double-0 status. The villain of the piece – Le Chiffre (Mads Mikkelson) – is a quietly sinister character who weeps blood. Bond was entirely reworked, right down to the rockier theme song provided by Chris Cornell. It is as bloody as any of Dalton’s films: it includes an extended torture scene wherein the naked Bond is bound to a chair as his testicles are whipped with a huge knotted rope. This is exactly what Bond should be: not an ageing star with corny quips or an overly gadgeted pin up boy but an unbreakable, ambitious fighter with nothing to lose.

Whatever SPECTRE holds for the world’s most infamous spy, the studios know they cannot fall back into the patterns established by Moore and Brosnan, they need to look to Dalton for inspiration. The world needs a different kind of protection now.

One thought on “Nobody Does It Better?”