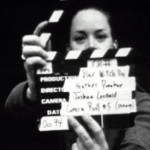 There was once a time when people thought The Blair Witch Project was a genuine documentary. That three filmmakers set out to make a documentary only to go missing. The internet was in its infancy and information wasn’t as accessible as it is now (though it often makes you wonder how Cloverfield would have been received in those times). The Blair Witch Project wasn’t the first found footage film to be produced, however it had the most impact. It changed the cinematic landscape as studios realised they could churn out low budget horrors for maximum profit. 17 years after its release, self-confessed super fan Russ Gomm has released a behind the scenes documentary on the legendary film. This is no retrospective look at the movie, instead Gomm has edited together hours of footage shot at the time to give an insight of how the film came to be. The Woods Movie was given its world premiere as part of the Glasgow Film Festival’s Frightfest programme and Moviescramble was there to see it.

Among the archive footage Gomm has edited together we get to see how the idea originated. Directors Daniel Myrick and Eduardo Sanchez discuss their love for The Legend of Boggy Creek and how they wanted to make a film that people could believe was real. It wasn’t enough for them to create something that scared people, they wanted the audience to be frightened once the lights came back on in the theatre. The most challenging aspect was the casting. It was important they found actors with the right chemistry and allowed the cast to essentially play themselves, allowing their own personalities to shine through to further enhance the film’s believability. It’s easy to mock those that bought into the hoax however the work that was put into creating the lie should be noted, something Gomm highlights. Yes, the filmmakers set out to trick people, but there no malicious intent involved. It was a marketing stunt and one that was artistically important to the film.

What I found most interesting was how the film was shot. I knew that the filmmakers gave the actors pointers and allowed them to improvise, but what surprised me was how much distance they kept. To create the sense of isolation they wouldn’t interfere with the cast, instead viewing them in a voyeuristic manner, much like the audience would go onto do with final footage.

Gomm shies away from splicing in footage of The Blair Witch Project, whether for artistic reasons or monetary ones, this strengthens his film. The Woods Movie has an immersive feel to it, much like The Blair Witch Project does. It’s a great companion piece to the 1999 box-office phenomenon and a must watch for any fans.