Before it even reached the UK, the expectations for Still Alice were high. Due to the award-winning performance from Julianne Moore, opinion was almost certainly coloured by the pre-release hype surrounding it. As we all know this can be as much of a hindrance as a help as the film studio tries to get people to view the movie.

Alice (Julianne Moore) is a highly regarded linguistics professor who has just turned fifty. She is in la loving relationship with a strong and supportive family around her. She starts to notice changes in herself. Forgetfulness and small lapses in memory are written off as tiredness at first and it is only when she finds herself lost in a place very familiar that she realises that things are far more serious. A diagnosis of early onset Alzheimer’s disease is confirmed leading to Ali, her husband and children facing the fact that the person she is will fade before their very eyes and she will be a stranger to everyone around her.

Featuring in virtually every scene  of the film, the performance from Moore is worthy of all the praise heaped on her. From the start of the film it is very easy to see why she has been held in such high regard. Irrespective of the fact that this the portrayal of a major illness (always a firm favourite with awards juries) this is an understated and nuanced performance from an actress who is never any less than great. She becomes the character and it is with a great deal of subtlety that she approaches the different phases of Alice’s illness. There is no need to invoke histrionics in the way she is able to convey the fear, anxiety and ultimate confusion of her situation. 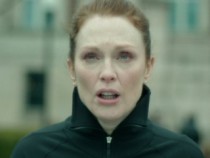 With a strong lead performance it is not uncommon for the supporting cast to have a hard time in making any impact on the proceedings. fortunately with the likes of Alec Baldwin and Kristen Stewart among the cast the film avoids this problem. Wisely both actors avoid any thoughts of trying to steal scenes. They act as a foil to the lead performance as the illness develops. Baldwin, in his second consecutive turn as the husband of an Oscar-winning performance, conveys the confusion and apprehension that all of the family feel. There is an undercurrent to his performance that highlights the frustration he feels being around someone who is fading away. Kirsten Stewart is also great and finally seems to be moving on from being Bella from Twilight. She is casts the black sheep of the family, one who is pursuing her own path. The conflict that exists between her and her mother eventually enable them to come to a grater understanding.

As well as the performance the film makers are able to chart Alice’s deterioration in subtle ways. In the initial scenes Alice is shown in a series of long and mid shots which emphasise the world around her and the role she has in it. As the disease takes more and more of her the camera work changes. Alice is always seen relatively close up in a very shallow depth of field shot which compounds her feeling of isolation. Adding to the mood is the use of a subtle score which complements the images on-screen and makes the film a more powerful experience.

Overall. an excellent lead performance which handles a very serious subject with care and skill. Recommended.