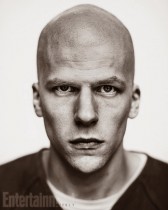 With just under a year to go until Batman Vs Superman: Dawn of Justice, we get our first official image of Jesse Eisenberg in the role of Lex Luthor. As with all thing related to this film, the casting choice for the part of Luthor seems to have gotten the fan boys in a rage with several rather unkind mocked up photos of Eisenberg with a bald head appearing online.

The first official photo shows what the director saw in the actor in the first place. With the moody black and white shot he certainly looks the part. I, for one, am more than prepared to trust that his performance as the super villain will not be anything short of great. Eisenberg is a terrific actor with a good screen presence,

Batman Vs Superman: Dawn of Justice is released on the 25th of March 2016.