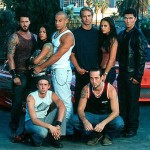 With the latest installment of The Fast and the Furious series due for release on April 3rd, we at MovieScramble thought it might be just the right time to look back at where this adrenaline-fueled franchise began, and try to figure out just why it has been so successful.

Believe it or not, The Fast and the Furious first hit our screens way back in the summer of 2001 and brought modified cars right into the forefront of mainstream popularity and had teenage boys across the country taking their Ferrari posters off their walls and replacing them with souped up Honda Civics and Subaru Imprezas.

To say the cars are the stars in this film is definitely an understatement; in fact, I would say it’s the cars that carry the whole film. Although it is the break that catapulted Vin Diesel and the sadly missed Paul Walker into Hollywood stardom, without the buoyancy of their fuel-injected, steel co-stars, this would’ve simply faded into the growing void of cliché filled and obtuse mediocrity.

Directed by Rob Cohen, The Fast and the Furious stars Paul Walker as Bryan O’Conner, an undercover cop trying to infiltrate a gang of street racers he suspects of carrying out a series of truck hijackings using blacked out, modified Honda Civics and some elegantly sweet driving skills.

Vin Diesel takes the role of Dominic Torretto, the leader of the gang who takes a shine to O’Conner, 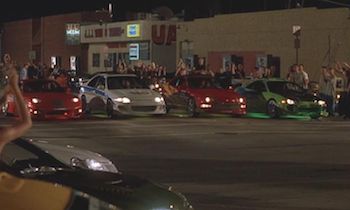 inviting him into his inner circle despite the protests of the rest of his crew. Whilst undercover, O’Conner falls for Dominic’s sister, (Jordana Brewster), and gets enticed into the underworld of illegal street racing creating a dichotomy of doing his job and looking out for his new found friends.

As I mentioned above, the real stars are the cars themselves. They are both elegant and powerful, smooth yet hazardous; each scene featuring them an absolute masterpiece. The street racing, although highly dangerous and very illegal, looks like the party you just don’t want to miss. With the flaming exhausts, wheel spins, skids and high-speed, adrenaline pumping drag racing, it’s no wonder this movie was able to spawn another six sequels.

The Fast and the Furious, although sharing it’s name with a 1955 film about fast cars, was actually based on a 1998 article in Vibe magazine called ‘Racer X’ about street racing in New York City. So yes, it may be 14 years old and the fashions do look a bit dated, but the cars still look magnificent and would still turn heads and drop jaws even today.

If you’re looking for a straight up, no brainer action movie, and willing to sacrifice decent dialogue and quality acting for the thrills & spills of high-speed car chases and plenty of machismo, then this is the film for you.  However, even if you don’t think you fit the mold for this sort of film, I’d still recommend you give it a try as you may just fall in love with some of the real performers on the set and that is the cars themselves.

2 thoughts on “The Fast and The Furious”