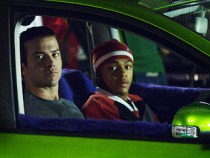 The third film of the Fast and Furious franchise is a curious beast. It marks the first film where none of the original cast members appear, it has been transplanted to another continent and on the face of it is just using the brand name to boost interest in the film. The enjoyment of the film, for me, is dependent on how you view it. Tokyo Drift is the third movie sequentially, but as the later installments show, it is not the third chronologically. It actually fits after the sixth film just before the post credits sequence and informs the motivations for the seventh film.

The story focuses on troubled teen Sean (Lucas Black). After a car race with other high school kids he finds himself in the situation where he can either go to jail or move to Tokyo where his estranged father is serving in the US Navy. No choice really. As he settles into his new environment he falls into the company of the local racers who practice the art of drifting: manipulating the car so it appears to slide or drift round bends. The top racer is D.K, the drift King (Brian Tee) who is connected to the local Yakuza boss. He humiliates Sean in a race with Sean finding himself in debt, to the tune of one car, to Han (Sung Kang) the business partner of D.K. Now Sean is totally immersed in the Drift culture which can only lead to confrontation with his father and his rivals on the track.

The story line in this movie is the weak point. It’s something that has been done time and again and is very difficult to convey in a refreshing way. The whole outsider who must find his place is so familiar that it lessens the impact of the movie. To its credit though, the film does hit the core values of the franchise. Once again there is an emphasis on family whether it be blood or through a common bond. The series takes pride on its diversity and inclusion. Tokyo Drift is very similar with white, black and Asian actors of both genders to the fore in roles that are not stereotypical and actually have a bit of depth.

There are two major plus points that contribute to raise this film above the norm. This is the first in the series that Justin Lin is in charge of. To say that he had an influence on the success of the franchise is a gross understatement. He was able to drill down to the core elements of the series and use the themes of car racing and family to create something special. Although it wasn’t fully realised in Tokyo Drift, there are enough moments to keep you entertained and engaged with the film. The driving sequences are all beautifully shot against the spectacular backdrop of neon lit Tokyo. The key to these scenes is the pacing and length. Too long and they have a tendency to become a bit flaccid. If the momentum drops at any point then the excitement and tension follow suit. Lin is able to ensure that balance just right with a good mix of cinematography and unobtrusive CG work.

The other plus is the introduction of one of the best characters in the series. Han is complex and reserved figure throughout the film. His motivations are unclear and at times he seems detached from his feelings. This is never really explored in the film. It is only in the later installments when his character is fully fleshed out. As I noted earlier it is preferable to view this film after the sixth one as it makes a lot more sense with regard to the character of Han. Whether by good fortune or through careful and intelligent writing the character appears much stronger with the benefit of films four through six.
Overall, the weakest of the franchise but still an enjoyable and memorable film. Recommended.