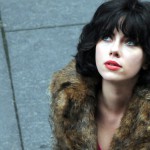 With each passing day it seems less and less likely that we’ll ever see a live action Akira film. However another manga classic that has been languishing in development hell is scheduled to start shooting in 2016, at least according to its star.

“It’s happening,” Scarlett Johansson told Collider. “It will be shooting the beginning of next year so I think we start production January or February.”

Originally released in 1989, Ghost in the Shell was adapted into a feature length anime in 1995 to critical acclaim and box office success. The film has also served as huge influence on the Wachowski Brother’s Matrix trilogy,

Johansson is cast as the lead, Major MotokoKusanagi. She is an augmented-cybernetic human employed as the squad leader of Public Security Section 9 (a fictional law-enforcement division of the real Japanese National Public Safety Commission). In a time where there is much criticism of the lack of female leads in action/superhero films, a lot of eyes will be on Ghost in the Shell in the hopes that it can buck a trend. For those unfamiliar with the series, Kusanagi is seriously bad-ass and anyone familiar with Johansson as Black Widow and Lucy will know she’s more than capable of pulling this off.

Directed by Rupert Sanders (Snow White and the Huntsman), the film is currently slated to arrive in the US on 14 April 2017. A UK date has yet to be confirmed.