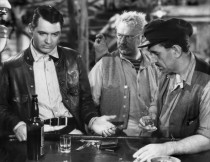 Getting a cinema release for the first time in seventy six years is the Howard Hawks classic adventure film. Only Angels Have Wings. The film is classic in every sense of the word. It was one of the early breakthrough films with Cary Grant as a leading man and is notable featuring an early performance from screen idol Rita Hayworth.

In a stop over in the port of Barranca, music hall artist Bonnie (Jean Arthur) finds herself in the company of some airmen who work for the local mail delivery company. Barrance is the stop off point for mail delivery to inland locations. The only way through for the old aircraft in the service is via a treacherous 14,000 feet mountain pass and the weather conditions make the journey very difficult. Fronting this business is Geoff Carter (Cary Grant), a fast talking no nonsense flyer who takes on the jobs no other pilot can manage. Thee company are trying to win a long term mail contract so any accidents, mishaps or pilot deaths need to be put to one side so the mail gets out. As the problems mount for the business, the introduction of a new pilot Bat (Richard Barthelmess) and his wife (Rita Hayworth) leads to tension as Bat was previously involved in n incident where a flight crew died after he bailed out of a plane.

This film marks the beginning of a very successful decade for director Howard Hawks. Now regarded as a master of his art, jumped between several different genres to produce some of the best loved films of the period. This is an excellent example of his work. He allows his actors a little freedom to express their characters within the narrative while keeping the story flowing. There are few scenes that do not push the plot.

Cary Grant was still in the ascendancy at the time and the collaboration between him and Hawks had already paid dividends on the hit film Bringing up Baby the previous year. In this film, he is able to give a relatively straight performance which highlights his talent as an actor in a serious role. He needs to be convincing in the part of Geoff as he is the lynch pin of the film. Everything revolves around his decisions and leadership so a wise cracking persona would have seemed at odds with the situation at hand. Jean Arthur was considered to be a bigger star at the time and she is a match for Grant’s performance in a slightly less serious role. After her role sets up the unfolding drama she is called on to basically hang about and fall for Geoff, giving an additional layer of tension.

It is an interesting location for the film. The vast majority of the run time is set in the hub of the operation. It is part hotel, nightclub, mail room and airport. It enables the action to easily flow from one room to another while preserving the credibility of the story. From a plane crash scene to the ensuing drowning of the sorrows in the bar are but a few steps away from each other.

For a film made under the studio system it has a relatively lengthy run time of over just over two hours. Most films of the period clocked in at no more that ninety minutes to maximize the number of screenings and keep costs down. The film doesn’t feel drawn out and the additional time is required to build up the interactions between the characters and set the stakes for the finale.

The restoration of the film makes such a difference to the viewing experience. The images are clear and crisp while the sound is up to modern standards. Being used to seeing duff transfers of these old classics should soon become a thing of the past if the these re-releases continue to be a success.
Overall, an entertaining an enjoyable adventure film with the unique talent that was Cary Grant. Recommended.