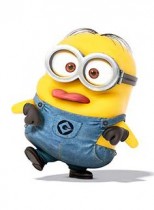 June is a pretty slow month for UK movie releases, probably because no-one wants to go head to head with a genetically modified dinosaur, unless they are small yellow groupies looking for a new master, or just groupies in general.

This is the biggie. A reboot with a new cast that takes us back to Isla Nublar and its cast of CGI dinosaurs. The trailers have promised big things and I think the team of Chris Pratt and Bryce Dallas Howard looks very appealing. My greatest fear is what can they bring to the table that we haven’t seen before? The trailer starts out with the theme park in full swing with giant sea monsters performing tricks like dolphins. We know it is going to end with running and screaming and we will pay our monies and eat our popcorn. I just hope we don’t feel cheated in the end.

Despicable Me was a hit that spawned an OK sequel, however it was always Grue’s Minions that the kids loved. After an excellent series of shorts the yellow tic-tac men get there own movie. Sandra Bullock replaces Steve Carell as the Minions’ boss, but I think we can expect more of the same and based on the trailers that same will be just fine for me and my kids. You can never have enough banana jokes!

It’s taken 4 years but finally the Entourage TV series gets a movie. The trailer is full of celebrity cameos and probably lots of inside jokes that I didn’t get (having never watched the TV series). I guess if you were a fan of the TV series then you will leap at the movie. Personally I found the trailer annoying and will be happy to skip this one.

Why does Melissa McCarthy keep getting movie roles? Who watches these films? If you watched any of her previous outings and enjoyed them then Spy gets it’s full UK release in June after a limited release last month. Based on the trailer you can expect lots of crude humour and prat falls and I’m sure that she will save the day.

Personally I’ll be sitting down to watch Kingsman: The Secret Service which gets its Bluray release this month. Check out my earlier article on why this may be the greatest movie of the year! To find out if I change my mind you will have to come back in December when I write my review of the year!

Writer at Moviescramble. Master of the Yorkshire Martial Art of Ecky Thump. When he is not being a Dad or office slave he loves nothing more than watching dodgy super-hero movies or fake historical dramas with excessive nudity.