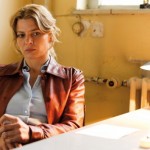 The recent German film West (original title Lagerfeuer), set during the cold war has one central message – be careful what you wish for. For many in the same situation the other side of the Berlin wall seemed like the garden of Eden, only for the truth to unfold as they arrived in a very different, but all too familiar setting.

Nelly is a woman who is looking for any sort of future. She is living in East Berlin with her pre-teen son and is in a tight spot. Three years previously her boyfriend, a Russian academic, died in an accident while visiting Moscow. There is nothing to keep Nelly there any longer. She arranges passage to West Germany posing as the wife of a friend. After a few fraught hours at the border patrol she arrives in the West. What she finds is a halfway house where Eastern migrants are forced to stay until they can move to more permanent accommodation. Some stay for days, others for years. There are rumours that the camp is full of East German agents and it is wise to trust no one. Before she’s allowed to start her new life Nelly must try to convince the US and German authorities that her former boyfriend is in fact dead and didn’t disappear due to being a Soviet spy.

The film is very sparse with its details so you are in the same position as Nelly. Early on she makes friends with a girl who lives in the next room to her. Is it coincidental or is there an agenda in place? Similarly, when being questioned by the authorities there is a good cop/bad cop thing going on with the US agent coming across as the nice one. He seems genuinely concerned for her but it could be a part of his game. After all no one is as they seem.

There is a running theme of paranoia throughout the film. Nelly is constantly questioned, both inside the offices 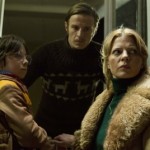 of the authorities and outside while among the residents. Very few people appear to be genuine. At one point during questioning Nelly is asked why she wanted to come to West Germany. She looks angry as she tries to explain that the reason for leaving the East was to get away from the very questions she is being asked by the so-called free country.

The central performance of Jordis Triebel as Nelly is key to the success of the film. She comes across as being afraid most of the time but you can see the iron will just below the surface as her instincts kick in to protect her son’s future. There is a scene early on that sets out the motivations behind her character. While being questioned before leaving the East she is subject to a strip search. She is forced to remove all clothes and even her rings for no apparent reason other than to humiliate her. This seems shocking at first until you see her face. Although never explicitly mentioned you get the impression that this is not the first time that this has happened to her. She must have been subject to the same treatment for the last three years and for her this is now part of the process she has to endure. A reaction to the demands will be met with a protracted and even more humiliating time.

The staging adds to the oppressive atmosphere of the film. The first scene opens on a snowy street and although it’s a touching moment between two people in love, it still has the bleak background to counteract any warmth you may feel. From there it is grey and dull all the way. The film is notable for the absence of any sunlight. The grey concrete structures, so popular in the sixties and seventies are all the more foreboding from the lack of light and colour.

Overall, a bleak yet absorbing drama that succeeds due to a very strong central performance. Recommended.