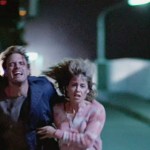 James Cameron’s groundbreaking 1984 masterpiece The Terminator arguably redefined the genre of the Sci-Fi/Action film, catapulting its director and leading actor into household name. With the latest addition to the series, Terminator Genisys hitting cinemas, we at Moviescramble decided it was only right to look back over this epic 30 year journey and subsequent sequels to see if they still stand up to the test of time.

There are so many iconic scenes in The Terminator, the first being the opening scene of a tank tread rolling over a sea of human skulls, shattering them to dust and giving us a glimpse into the apocalyptic future that is the fate of humanity.

In this future, machines have destroyed the world and brought mankind to the brink of extinction. One man, John Connor, has rallied the few remaining survivors and shown them how to fight back, eventually gaining the upper hand and pushing the machines onto the defensive. In a last-ditch attempt at self-preservation, Skynet, the self-aware AI that started the war sends back a Terminator (Arnold Schwarzenegger), a cybernetic assassin, to kill Sarah Connor (Linda Hamilton), the mother of the resistance leader before he’s even conceived. To prevent this, John Connor sends back Kyle Reese (Michael Biehn) to sleep with… ahem… save his mother and ensure the survival of both him and the human race.

What follows is an action movie that has been done to death over the past three decades and watching it back, it’s hard to get over the many clichés and tired plot sequences that must have been so fresh 30 years ago. Upon its release it must have blown the average cinema goers clean away, audiences who wouldn’t have seen anything of the like before. This isn’t to say it still isn’t a great film, it is.

Schwarzenegger steals the show with his portrayal of the Terminator and even now watching back, it’s hard not to get caught up in admiration as this Hercules of a man single-handedly walks into a police station, calmly and clinically shooting cops to get to Sarah Connor, the epitome of cool in his sunglasses and leathers. It is interesting to note that Cameron sold this role to Schwarzenegger by conveying that the film was more about the Terminator than the good guys and in this he was right, but would it have been the same film without Schwarzenegger’s physical presence? I highly doubt it, and considering he only has 14 lines in the entire movie, it’s his aesthetics probably more so than his acting ability that carries the role.

It is with the score that the film really shows its true age. Yes we have the iconic haunting theme tune, instantly recognisable to anyone over 30, but the dodgy 80’s synth playing alongside the action sequences really had me cringing and feeling glad we’ve moved on from that era. A shame really as it would have been absolutely fine when it was first released. 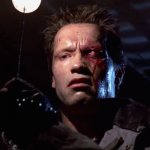 The Terminator will always be the holy grail of the Sci-fi/Action film, and without the massive influence it has had on the genre, the movie world would be a far poorer place, but with the advancement of modern technology and CGI this does look very dated, especially when these type of films rely so much on their special effects.

So in effect, was it groundbreaking? Yes.

Is it an iconic piece of cinematic history? Yes.

Is it timeless? Sadly no, so perhaps now is the right time for The Terminator to get the reboot treatment and bring it up to date with the advanced special effects we are so used to nowadays.