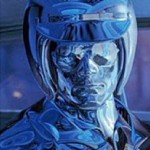 James Cameron’s The Terminator was a surprise success. Before it was released, many dismissed the premise as silly, which looks sillier in retrospect for a film that was deemed “culturally, historically, or aesthetically significant” by the Library of Congress in 2008.

Due to various circumstances including legal disputes and logistical roadblocks, Cameron wouldn’t release a follow-up until 1991. In some ways the film was an updated remake of the original yet this was no mere rehash of its predecessor. Terminator 2: Judgment Day would set the benchmark for action films and receive critical acclaim as one of the greatest blockbusters ever produced.

Ten years have passed since the events of The Terminator and Sarah Connor (Linda Hamilton) has been committed to a mental institution for the criminally insane. This leaves her son John (Edward Furlong) in the care of foster parents and like all future saviours of mankind, he’s quite the delinquent. Skynet’s Plan A failed, but every sociopathic AI has more than one bullet in the chamber. A T-1000 (Robert Patrick) has been sent through time to kill John as a kid and ensure he doesn’t grow up to be a threat to the machines. Like the first film, future John has sent back a protector, this time a more familiar Terminator, a T-101 model (Arnold Schwarzenegger). Although this is a much better guardian than a human could be, the T-1000 is an advanced prototype made of liquid metal. It is far superior to the older model and as such will prove harder to destroy. 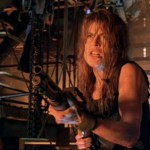 Films that languish in development hell do so with good reason. Terminator 2 is no exception to that rule. Cameron originally wanted two Terminators (including the T-100) in the first film but the special effects weren’t advanced enough. He waited until the technology was there, not wanting to risk his vision. The CGI was ground breaking for the time and it still looks good 24 years later as the T-1000 morphs, melts and mangles its way through the film.

Despite the amount of computer imagery on display, the legendary Stan Winston created practical effects when possible. The future war scenes are incredible, providing great menace as the machines are physical imposing. The battle-scarred T-101 is horrifically beautiful with the flayed arm as impressive today as it was then. T2 may rely on CGI but it isn’t dependent on it. A couple of the scenes don’t even rely on camera trickery as Cameron utilised the actors’ real life twins for maximum effect.

Arnie is on top form as he reprises his most famous role. The T-101 evolves as the plot unravels, learning to become human and providing a bond with Furlong’s John. What could have been a cheesy mess is instead a wonderful tale of friendship as the tin man gets his heart…well, almost, he is still a Terminator and Cameron isn’t about to get too schmaltzy on us. Still, if you don’t shed a tear at the penultimate scene then it’s you that has no heart.

Cameron stated that he wanted a leaner Terminator for Arnie to go up against. Patrick’s T-1000 was slender, menacing and cruel, he was more emotive and sadistic as shown in the third act. It’s a film stealing role, but for me the standout is Hamilton. Sarah Connor has evolved so much between films that the character is barely recognisable. She is the mother of the resistance that she thought she would never be. Tough, dangerous and unfortunately detached from emotion. Her maternal relationship with John has eroded and this plays beautifully in parallel to the father son motif. 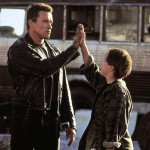 Terminator 2: Judgment Day is slicker, bigger and more polished than The Terminator. While the first one has a distinct 80s feel to it, T2 looks timeless with little if anything anchoring it to the 90s. Brad Friedal’s score benefits from the advanced production and complements each and every beat perfectly.