years after the brilliant Terminator 2: Judgement Day, Terminator 3: Rise of the Machines was released in 2003. It takes place about a decade later as John Connor, (Nick Stahl) is now a drifter living off the grid. He happens upon Kate Brewster (Clare Danes) and soon discovers that Skynet still has it in for him. The upgraded T-X in the shape of unbelievably hot blonde, Kristanna Loken lands on earth on the same night and Arnold Schwarzenegger returns to save Connor and Brewster at all costs, this time with a little psychological programming.

Kristanna Loken is suitably flawless and bendy, morphing and changing as she pleases in some pretty cool fight scenes, her little pointy finger like an evil robotic witches twitch.

However she does not have the clinical coldness of Robert Patrick and seems to be taking just a little too much delight (verging on arousal) in chopping up humans for a heartless robot. There is nothing interesting about this cyborg other than the fact that it takes the female form. Sure, she can turn her hand into a cannon but it’s not as compelling as the mercury like composition of the T-1000 was a surprise in Terminator 2, or the sheer size, strength and lack of emotion was in Schwarzenegger in The Terminator.

Schwarzenegger seems to be having fun in his return to the role, but he is having fun alone. This Terminator is cliched and over the top. It was more cringe than comedy and definitely not frightening. At one point I did actually involuntarily roll my eyes at the rehashed lines from previous movies. This really is a shame because I like Schwarzenegger.

Stahl and Danes are busy trying to portray real characters with depth, and as usual Danes cries brilliantly, but they just seem to be in the wrong movie, more a criticism of the directing than the acting. 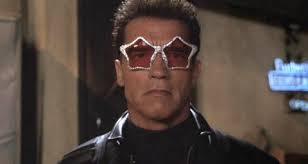 tion, explosions and machines are impressive and some of the fight scenes inventive, but I don’t care enough about the characters to care about the action. For such a large budget, there is something incredibly lazy about the whole thing. It has neither the dark terror of the first film nor the creepy devilry of the second. It tries to be tongue in cheek, but never quite hits that mark either. It is like a remake of Judgement Day with none of the 90s indie vibe, or for that matter any vibe at all. There are numerous plot holes, incredible in such a bare script, and the charming, almost endearing relationship between Connor and the Terminator in Judgement Day is missing. Had more emphasis been made on building the story of the two leads, their chemistry and their nightmarish future, this particular Terminator could have been a movie in its own right instead of a poor remake.