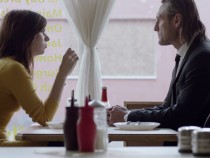 It’s always interesting when the world of cinema throws up a bit of a surprise. In the case of the film Everyone’s Going To Die it is the emergence of Rob Knighton as an actor and leading man. A former carpet fitter, Rob has found a level of fame in his fifties as a model alongside the likes of David Beckham and now on the cinema screen. The film, made in 2013, marks his debut. He has been most recently seen in the British drama Anti-Social.

The film is set in a sleepy seaside town where the food is terrible and the views are even worse. Melanie (Nora Tschirner) is living there with her boyfriend, although living is putting a bit of a positive spin on it. She spends her time wandering the town or being made available for child minding duties to her Boyfriends niece. She is stuck. Ray (Rob Knighton) arrives in town primarily to pay his respects to the family of his recently deceased brother and also to carry out a bit of dodgy business for his boss who is always at the end of a phone. When they bump into each other they are immediately drawn together in a non-physical or emotional way. They just get along. Can their blossoming relationship develop with a boyfriend  a grieving family and a loaded gun in the way?

The film is written and directed by first timer Jones. It has been around for two years and been well received at film festivals around the world. With a crowdsourcing campaign and the backing of the BFI it finally achieved a theatrical release.

It has a very laid back feel to it with some nice cinematography that lingers on the scenes giving the impression that, like the characters, the film is caught up in the slow pace of the town. It feels just right for the film and lends an extra layer of depth to the production. There are some well chosen musical cues, both English and German for the Melanie character who is stuck between leaving home on an adventure and looking back to a better time.

Ron Knighton is surprisingly good given his relative lack of experience in front of a camera. His performance is very laid back with more conveyed by body language than words. He reminded me of Terence Stamp in a number of ways in the movie and I look forward to seeing more of his work.

The central performance from Nora Tschirner is the one that hold the film together. There is a pivotal scene about half way through the film where it is all her. The camera is close on her, slightly over her shoulder, as she explains her situation to Ray. It is basically a monologue with the occasional remark or reaction added. The camera is static throughout and it is left up to the acting skill of Tschinger to convey the emotion and feeling for the reasons why she has found herself in the seaside town. It is tense, moving and the best bit of the film. It really leaves an impression.

Overall, a low budget film that works due to the skills in front of and behind the camera. Recommended.