In the blockbuster landscape of today, there are certain elements of movies that we take for granted. Devices that film makers routinely use to engage with an audience are all pretty well known now and it had got to the stage that in some more generic films we can tell what is going to happen based on a visual or aural cue. Obviously it had not always been so. One example of a pioneering film which is getting a well deserved restoration and cinema reissue is the 1929 classic film Man With A Movie Camera.

He achieves this by documenting the city. The film without a story uses visuals to represent the way that a city functions, much like a machine and how people play a part in the operation of the machine. The city is shown from early morning as it wakes. People rise and ready themselves for the day. Machinery kicks into life. Trams start to run and shops open. All of this is captured by a roving camera man and his trusty hand cranked camera. We, as the audience, follow the cameraman for periods in-between isolated images of the city. 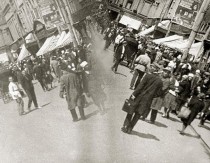 For a film with no script it flows beautifully. There is an order to the images that tell a story. Using different images the film maker shows the parallels between the machine kicking into life and the people starting their day. There is a routine that each must follow be it the machine that needs to be started in the correct way or the woman who must wash, dress and brush her teeth before starting out.

One of the reasons this film is so well regarded is the way the film maker makes use of techniques to convey the story. At the time, it was considered highly experimental as a lot of what is presented on screen were not widely used. It is a genuine surprise to see just how varied and proficient the techniques were. Most of them remain in use to day and form the basis for modern film making.

Making extensive use of the portability of the movie camera on its tripod the scenes are always inventively staged and usually shot from an angle that forces the audience to evaluate the scene slightly differently. It adds tension, and drama to the film in what could be viewed as very mundane tasks. Speed is utilized to great effect with the film being slowed to emphasise a certain element of a particular scene or sped up to highlight the way in which the city ‘lives’.

As well as the above the film uses split screens to great effect, again to mirror the human and the machine element of the process. There is a sequence where a lot is going on. There are rapid cuts and it takes shows a lot of information in a relatively short time. It is only then that you realise hey! This is a montage sequence!

As with contemporary movies, the soundtrack is all important. Several different artists have scored the film over the years including Michael Nyman and a superb version from The Cinematic Orchestra. For the reissue the music comes from the Alloy Orchestra who wrote the soundtrack based on the instructions of the director. It incorporates sound effects as well as music.

Man With A Movie Camera is back in cinemas on the 31st of July.