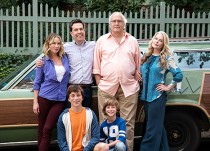 This movie was a real surprise to me. With all the remakes and reboots that fill up the multiplexes it is easy to become cynical when another beloved property returns to the screen. The Vacation series is held in high esteem by many, not for their great film making qualities or their unique vision. They made people laugh and the humour stood up to repeated viewing. How could a remake possibly be up to the same standard? The answer is, surprisingly easily.

Rusty Griswold (Ed Helms) is all grown up. He is a pilot for a budget airline and lives in suburbia with his wife Debbie(Christina Applegate) and two sons. He has the feeling that the family is drifting apart and he hatches a bright idea to strengthen the bond between them. A road trip to visit the legendary Walley world theme park. With a Hungarian rental car and two thousand miles of road, what could possibly go wrong?

This film blows away any skepticism in the first couple of minutes. The film begins with the familiar strains of Lindsey Buckingham playing Holiday Road as the titles show a series of holiday horror snaps. OK, so not a bad start. What follows is a movie that hits you with gag after gag. It is almost relentless. The hit rate is high and it hardly stops for breath at times.

The main strength of the film lies in the writing and the casting. It is basically a series of set pieces joined together with time on the road. The film is really aware of it past and acknowledges it in several scenes. There is real cleverness about the jokes as well. Some of them are established well in advance and put to the side only to appear much later. Ed Helms is a seasoned comedy performer who eases nicely into the main role. To take over the mantle of Chevy Chase is not easy but he just about pulls it off. His timing and deadpan delivery are just perfect.

If were only him that the film concentrated on it would quickly run out of steam. Fortunately there is a very strong supporting cast who is allowed to take centre stage at various points in the film. Christina Applegate is superb as Debbie, the long suffering wife of Rusty. She gets her own story arc in this, which includes a trip back to her college days of Debbie does anything. To see her try to tackle an assault course after downing a pitcher of beer is not something you forget in a hurry.

Chris Hemsworth pops up in the role of Stone, the brother in law of Rusty. He has no issues taking the mickey out of his hunk persona as he portrays a local TV weatherman with an impressive six pack and certain other attributes. Of course, the older Griswold’s pop up in a short cameo. Chevy Chase still has the comic timing and his brief appearance doesn’t seem bolted on for the sake of it.

Overall, a film I had my doubts about that turned into one of the funniest films I have seen this year. Recommended.