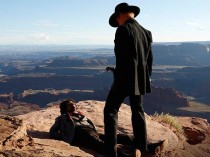 The first teaser for the new HBO series Westworld is out now. The show is a remake and re-imagining of the 1973 film of the same name. The show is under the watchful eye of creator Jonathan Nolan who is best known for his writing duties on most of his brother Christopher Nolan’s films and as the creator of the TV series Person Of Interest.

The basic outline for the show sees two guests enjoying themselves at a high-tech amusement park where there are different worlds to explore and interact with the robots who inhabit the 100% immersive areas. While in the wild west world there is a computer malfunction that causes the robots to behave bizarrely. The pair find their lives are in danger as they are hunted down by a gunslinger robot.

Westworld will air on HBO in the US and probably Sky Atlantic in the UK. No release date has been announced but it is expected to be out in 2016.