The Intern is a refreshing change for a mainstream film. As an audience we come to expect certain things from Hollywood films. The chief one is the type of person you see on screen in the main roles. It is usually young to middle aged white males. They tend to have the main story arc and steer towards the successful outcome. Writer / director Nancy Meyers has other ideas. For The Intern there is strong representation for two groups that normally slot into the supporting cast. It was a pleasant change to see the retired and the strong independent female playing such prominent roles in the film.

Jules (Anne Hathaway) runs a successful internet fashion company. She has built it up from nothing to a position where the company has over two hundred employees and is expanding at an astonishing rate. She is very hands on which leads to long hours and too much time away from her husband and small child. As part of a new initiative the company decide to take on senior citizen interns. The idea being that these people with a lifetime of experience can benefit the company as it moves forward. As an example to the workforce Jules is forced to take on Ben (Robert De Niro) as her intern. Dead set against the idea for several reasons, including a mild phobia of old people brought on by her relationship with her parents, Jules resists. Ben is a very charming and intelligent man who immediately starts to have an impact at the company. What he has to do is convince Jules of his worth and be there for her as she tries to steer the company in the right direction.

The film really benefits from Meyers decision to avoid the usual clichés associated with this type of story. Strong female leads are few and far between, although things are admittedly getting better with the likes of the character of Furiosa from Mad Max and the collective cast of Bridesmaids. It would have been easy to make Jules a typical professional woman who is good at her job but is flawed in so many other ways. She is successful and business minded but that doesn’t make her a hard or ruthless person. She engages with everyone at the company and is able to create an atmosphere that fosters growth and development. Instead of being hard-nosed, Jules comes across as being normal and very smart. 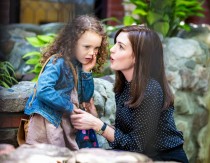 For the character of Ben a similar approach was adopted. Instead of a doddery old guy who cannot remember things we are presented with a man totally in charge of his faculties and eager to learn new things. The usual problems with embracing technology are touched upon but it doesn’t define the character. He has had over forty years experience in business and he needs new challenges in order to feel alive.

As Ben notes during the opening monologue to camera (which doubles up as a personal essay in video form) he has done all the retirement stuff like travel and hobbies. He needs to belong and to be seen as useful. In his character we see a certain amount of charm and grace. He has a way of presenting himself that is classed as ‘old school’ due to his grooming and manners. These are not used as a set up for jokes but are celebrated for the contrast to men’s fashion today. He also doesn’t come across as being some sort of saint. He has flaws and the ageing process has slowed him down and forced the usual medical issues on him.

The film is a gentle comedy that rolls along nicely for its two hour run time. What raises it above the norm is the on screen chemistry between the leads. Thankfully it’s not a romantic situation which would had difficulty in engaging the audience. Ben is more of a concerned Uncle figure in her life. The tension at first is mainly due to how attentive he is. He picks up on things very quickly and this is seen by Jules as a problem in case she says or does something that could be deemed inappropriate for the head of an up and coming business.

Given that the film takes such a positive stance on ageism it misses a trick with other forms of diversity. In the office environment the vast majority of the staff all fall into the Caucasian grouping. There is hardly any variation and it is really noticeable since the film is set in New York city. Contrast that with a scene in the company’s warehouse and the situation is  almost reversed. it is a small criticism but for me it stood out.

Overall, an engaging and entertaining comedy.