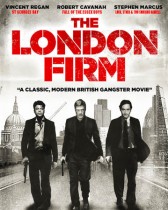 The publicity for some films doesn’t really give the film a chance. To look at the poster for The London Firm (on the left), you are presented with an image that supposedly says something about the story or theme. The film would seem to be about London gangsters doing their thing, possibly heist related, in the centre of London. What we actually get is something very different. I realise that the purpose of marketing is to gain an audience but going so far as to deceive potential viewers is never a good way to go, especially if the actual product is a pretty decent film.

The film opens in the back of a van. Three un-named men are sitting having a discussion. It turns out that one of them is a lawyer, known as the contractor (Roger Aston-Griffiths), and they are on the way to a ‘job’ for someone. Who or what the job is not disclosed as the men don’t know themselves. Two of the men pass out and later wake to find the facilitator brutally murdered. They need to figure out how to extricate themselves from their makeshift prison and who is behind the situation.

The film uses a very clever device to kick off proceedings. B (Seb Castang) is recounting a story from a magazine he is reading to help pass the time in the back of the van. When he finishes the other two pick away at the story and criticize the way he told it. He started in the middle and then filled in some of the details from the end and the start. The film itself uses the same technique to tell the story. The action moves back and forward filling in the blanks while not revealing too much to the audience.

The main characters in the drama have no names. Instead, on the credits they are simply known as A (Vincent Regan) and B. Initially the film was called AB negative, but this was wisely changed as it sounds like a medical drama. Over the course of the seventy-five minute run time, the histories of the characters are told, interspersed with the present. There is a shady crime Boss Mr Fines (Stephen Marcus) who seems to be bringing them all together. Very little is given away initially and it isn’t obvious what is going to happen in the end.

The principal performances are solid given that some of the dialogue could have done with a bit of a polish. There is a subtle touch of humour when B tries to come across as being more knowledgeable than he obviously is by using big words. Unfortunately his use of language catches him out with A remarking at one point “That’s not even a real word”. A bit of Del Boy humour that worked well within the drama. It is a two-hander for much of the movie and the actors are able to engage the audience through their screen presence and chemistry.

The London Firm won’t win any awards for originality as the set up has been seen several times before. I ended up comparing it to parts of The Usual Suspects with the use of a lawyer to bring the protagonists together, a shady crime boss and a fractured narrative structure. It isn’t on the same level as the Keyser Soze movie but it does engage the audience.

The film looks good and this is in part down to the choices of the director Neil Horner. The principal setting in the van is used very well. we get the feel of motion with the gentle sway of the camera and the way the light changes from orange to blue to reflect the street lighting filtering though the roof of the van. When A is talking about his desire to retire and spend time on a beach he is bathed in the warm orange glow for an extended period His face then falls in recognition of this foolish hope as the colour on him  switches to blue. The best of the rest of the film sees shots of a card game where shadows are used to great effect to enhance the mood and tension.

Overall, a decent British drama that is something a bit different from the usual geezer with guns offerings.