Based on the seminal anti-war autobiography of the same name by Vera Britten, Testament Of Youth was released at a very opportune moment. The first world war was in everyone’s mind and was regularly in the news as 2014 marked the hundredth anniversary of the start of hostilities. The great war, as it was known, was a bloody and prolonged war that cost many thousands of lives on both sides.

The film is set in a time of great change. War with Germany is on the horizon. Men are very much in charge and women, without the vote, are expected to marry, have a family and be second best to their male counterparts. Vera (Alicia Vikander) is a particularly bright and intelligent woman trapped within the confines of middle class society. Like her brother Edward (Taron Egerton), she desperately wants to study at Oxford University. Her father (Dominic West) has other ideas about this and is reluctant to agree to it. While trying to persuade them she meets Roland (Kit Harington), a friend of her brother. There is a n immediate connection. Just as she gains access to University war is declared and her brother and his friends enlist in the army. This leads to Vera helping with the war effort, first as a nurse in London and then transferring to a field hospital near the front in war torn France. 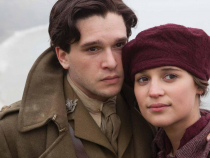 Alicia Vikander seems to have appeared in so many prominent films this year. This is the first of her six screen appearances in 2015 and it firmly establishes her as an actor of some quality. She tackles the role of Vera with a great deal of poise and restraint. It would have been all too easy to make her preachy and smart but thankfully her characterisation steers well clear of this. Vera is a young woman who despite her intelligence has little life experience. The journey that the character embarks on is reflected in the performance.

The recreation of the period is impressive The locations and the set design teams have done a fantastic job with a real emphasis on the details. There is little in the way of stock locations that we often seen in films set in the early part of the twentieth century and this adds to the authentic feel of the film.

The film uses visual contrasts as a device to emphasise the changes in Vera’s life. The country home and its surrounding lands are all brightly lit and very welcoming. The opposite can be seen with the hospital environment where she lives and works. The wards are dark and oppressive, her shared room is cramped, dull and shabby. This is taken further when Vera transfers to France. Her she is faced with the horrors of war and the ever present spectre of death. What she doesn’t lose is her sense of compassion. She treats all the wounded equally regardless of the flag they follow.

One scene in the field hospital stands out. It is very reminiscent of Gone with the Wind. Vera leaves the confines of the ward to help treat new arrivals. As she walks between the rows of injured men the camera slowly pulls back to extent of the casualty list. It brings home the real cost of war in terms of human life.

Overall, an impressive and topical biography which benefits from an excellent central performance.