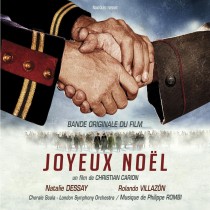 There are not many Christmas movies that I haven’t seen. I have been an avid fan of films of the festive season ever since I used to excitedly pour over the Christmas edition of the Radio Times. Like everything, you either like Christmas movies or you don’t. The traditional ones are usually overly sentimental for many tastes other than that of children, or adults who have somehow never quite forgotten their inner child. I fall into the latter category and I give you no excuses for it. Joyeux Noel is a sentimental Christmas story that seemed to have slipped past me on its release in 2005. While it is a shame to have missed it at the cinema, it is just as relevant today as the year it was released, or the time it represents.

Joyeux Noel is a simple story. Several months after World War I has begun, French, Scots and German soldiers have been fighting in the trenches in German occupied France resulting in the loss of many lives on all sides. On Christmas Eve, opera singers and lovers, Nikolous Sprink (Benno Furmann) and Anna Sorenson (Diane Kruger) decide to return to the trenches to sing to Sprink’s fellow German soldiers after performing for the German Generals. Meanwhile, the

Scots have commandeered several sets of bagpipes and start playing Christmas songs and songs from home. In a very touching moment, Sprink answers, by singing Silent Night and a Scots priest, Padre Palmer (Gary Lewis) plays the pipes along with him. Sprink leaves the trench and enters no-mans-land and is shortly after joined by the Scots, French and German lieutenants who bravely decide to call a truce for Christmas Eve. What follows is an impromptu, touching Christmas concert and midnight mass, followed by a day of football and exchanging chocolate and champagne on Christmas Day.

1914 many soldiers in the trenches in World War I lay down their guns for the evening and fraternised with their enemies for Christmas Eve and Christmas Day. You might recognise the story from the Sainsbury’s advert last year.

Joyeux Noel does not rely on long speeches or a complicated script, it simply shows you something that happened. That is not to say that its message is subtle. Make no mistake; this is an anti-war film. It begins with children reading out patriotic speeches about their countries and condemning their enemies. What is reiterated by different characters in the film is that your enemies are not human, they are godless – what happens in the film contradicts this and makes it plain that the soldiers are all human.

Little emphasis is given to the historical details of what started the war; it could be any war at any time. The priority here is the experience of the soldiers, and how they all share something

in that sense. There are several characters of different nationalities who could be the same people, like Jorg (Frank Witter) on the German side and Ponchel (Danny Boon) on the French side; the steady, reliable, funny friends of two of the Lieutenants, comically fighting over the pet cat they have adopted.

Lieutenant Audebart (Guilluame Canet) and Lieutenant Hortsmayer (Daniel Bruhl) could have been friends in another time. They know the same streets, the same hotels – they might have bumped into each other before the war. What matters here is the lives of these young men, that they have no real understanding of what they are fighting for, and that they, (many of them including Sprink, against their will), are made to suffer a chaotic, horrific war in a way that is difficult to comprehend.

Director Christian Carion focuses on close ups of faces, the expressions of horror and pain in the eyes of the actors, to tell the viewer all they need to

Music plays a central part in Joyeux Noel. It is shown as something that has the ability to transcend everything else. People singing in unison, the sound of a beautiful voice, the elegiac 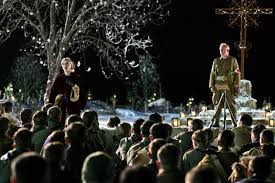 quality of the bagpipes, a Christmas Carol shared by a group of people – these things do something that very little else can – they take away the feeling of alienation that we human beings can carry around with us. In Joyeux Noel, it is fully felt. It is shown that the beauty in music is so unexplainable that no matter what is happening around the soldiers, when they hear music, it makes the world around them disappear, and it is clear that that is exactly what these soldiers needed.

The very fact that they have managed to create such a wonderful moment of peace, amongst so much death and violence, makes it all the more heart breaking. Make no mistake, this is a moment only, and what is to come next will most likely be devastating for these men and their families. We know the history of World War One, we know that it goes on for another four years. You can’t help but ask yourself, how can these men go back to their trenches and shoot each other. When they are ordered to after the truce, there is an awful moment when some of the men can’t bring themselves to do it. A tragic mistake is made, and then in one shot the blundering insanity of war is made clear. How can any man look another in the eye and shoot his fellow man, it makes you wonder.

In its moment of peace, however, it encapsulates exactly what the Christmas Spirit is. It is about putting aside all differences, with all fellow human beings, and simply celebrating the fact that despite all our suffering, we are here, and there is music, candlelight and Christmas trees, and no matter what the world may throw at us, we can always appreciate those things.

The film touches on the irony of the Catholic Church supporting the war so avidly. Padre Palmer is criticised for holding Midnight Mass with the enemy. The Bishop’s lecture to him and his subsequent speech to the new soldiers preparing to join the trenches seems almost anti-human. It doesn’t make sense in terms of the teachings of Jesus Christ, which is perhaps the intention. Padre Palmer hangs up his cross – is he hanging up his faith or just his faith in the Catholic Church?

What comes across is that the religion itself is not what really matters in the moment the soldiers share. That moment transcends religion, in the

way that many people think Christmas has transcended Christianity. The message is not about whether or not you believe in Jesus Christ, it is about feeling compassion and goodwill towards all men, whatever their country and whatever their religion. Christmas and Joyeux Noel is about hope, even when there is no legitimate reason to have any.

The film ends exactly as it should, and my participation in it makes the point perfectly. We don’t find out what happens to the main characters in the story. They are all sent to fight in other parts of the war, and my tears show that I know that the likelihood is, few of them will ever go home, but my heart harbours a flicker of hope that despite all reason to believe the opposite, they will find a way.

Far too sad to become one of my favourites, it certainly must be watched once, it captures a sad but beautiful moment in history.