While action films are often considered something of a ‘boys’ club’, there’s no denying that in the last few decades, the girls have more than proved they can hold their own, with a brilliant array of deadly leading ladies hitting the big screen. Transporter Refuelled (out on Blu-ray, DVD and digital platforms from December 26, 2015 courtesy of Icon Film Distribution) is no exception, featuring a kick-ass femme fatale accompanied by a trio of deadly sidekicks- and to celebrate the release, we’re looking back on some other equally lethal leading ladies…

Loan Chabanol takes the role of cunning femme-fatale Anna, in this brilliantly high speed, action packed, roller coaster guilty pleasure, which sees the return of reluctant action hero Frank Martin (played here by Ed Skrein). Along with her three seductive sidekicks, Anna engages Frank to orchestrate the bank heist of the century- which leads to him using his covert expertise and love for fast cars to outrun a sinister Russian kingpin, as well stay one step ahead in a potentially fatal game of chess with a team of gorgeous women out for revenge.

Prowling through the woods, bow and arrow in hand, her braid hanging loose from her head as she hunts… Jennifer Lawrence plays Katniss Everdeen, a character who not only encounters constant traumatic occurrences, but battles such a wide array of conflicting emotions throughout the films, it’s a shock she’s still standing by the climax. Deeply loyal, strong-willed and as fierce as they come, Everdeen is one character you would not want to mess with. Jennifer Lawrence has taken Suzanne Collins’ protagonist, and made her quite potentially the defining action heroine of this decade.

Perhaps the most controversial action heroine on the list, Hit-Girl AKA Mindy Macready (played by Chloe Grace Moretz) is an 11-year-old, C-word spouting killing machine. Delivering dialogue to make your ears bleed with deadpan brashness, Moretz has taken the character – made famous by Mark Millar’s graphic novel – and presented her to the world in a way no other could. Stealing the show alongside on-screen father Big Daddy (Nicolas Cage) in Kick-Ass, her role in the sequel perhaps proved a standalone Hit-Girl film would be a good route to go down. 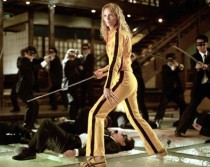 Quentin Tarantino and Uma Thurman came up with the idea of this character during the shooting of Pulp Fiction, a whole decade before the film hit cinemas; The Bride (revealed as Beatrix Kiddo in Vol 2) is a victim of an attempted massacre, a bullet to the head putting her in a coma for years. When she comes to, she seeks out each member of the Deadly Viper’s Assassination Squad, headed by former beau Bill, looking for revenge. Dressed in her yellow jumpsuit, a Hattori Hanzo sword in hand… The Bride is one of the most memorable action heroines of the noughties. 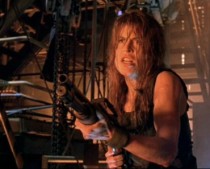 Initially appearing in James Cameron’s first two Terminator films (The Terminator and its sequel, Judgement Day), Sarah Connor’s life has evolved beyond cinema. However, Linda Hamilton’s performance remains the epitome of the characters existence. A young student pursued by a deadly robot (Arnold Schwarzenegger) sent back in time to kill her before she gives birth to John Connor, a man who will go on to lead a successful future rebellion against Skynet. A very different take on the character was presented in ill-fated television series The Sarah Connor Chronicles, in which Lena Headey (Game of Thrones) depicted the character, whilst Emilia Clarke (also in Game of Thrones) is  set to reprise Connor in fifth film instalment Terminator: Genesis in 2015, alongside Arnie himself.

Warrant officer Ellen Ripley starts out oh-so innocent, minding her own until a unknown alien creature boards the Nostromo, leaving Ripley the lone survivor after it kills everybody else on board – and so movie gold is created. Many have stated that Sigourney Weaver’s role isn’t simply the greatest action heroine, but the greatest female protagonist of all time. With an on-screen life spanning three decades, the character’s life was overseen by maestros including Ridley Scott, James Cameron (with Weaver turning in an Oscar nominated performance for sequel, Aliens) and David Fincher.