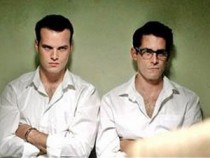 When I initially heard that there was going to be a rival release to the Tom Hardy movie Legend, there was a feeling that this would be a low budget cash in with geezers galore and a large dollop of shooters and leave it outs!. Interest was then peaked when it was reported that it would be a two-parter charting the rise and subsequent fall of the notorious brothers. The first part, The Rise Of The Krays was released on DVD in May 2015 and despite some particularly harsh critical reviews the movie found its audience with sales of over twenty-two thousand units in the first three days of release which is not too shabby for a film that didn’t get a theatrical release.

The Fall of The Krays picks up where the first film ended. Don’t worry if you missed anything as there is a handy catch up at the start including a recreation of the iconic David Bailey photograph. The brothers are right on the top of their game. Reggie (Kevin Leslie) is getting married to his long time girlfriend and things are looking up for their criminal enterprises as links are forged with the Mafia. Of course, when you reach the top there is only one way to go and that is down. At this point, Ronnie (Simon Cotton) is only just being held in check by the influence of his brother. They still work together effectively. It is when Reggie starts to have problems at home that things take a turn for the worst. With Ronnie out of control and the police starting to look again at jailing the firm, the Kray brothers are up against it. 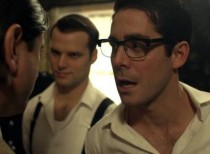 With what looks like a modest budget you cannot fault the ambition of the film makers especially the director Zackary Adler. The look and feel of the movie is consistent with the first one and has that authentic 1960s feel to it. For a film to attain this takes a lot of effort and a great deal of attention to detail. Well chosen locations add to sense of period and a selection of lesser known songs from the era make a welcome change to the usual tunes that pop up in these types of films.

The main actors basically carry on the characters where they left off. The on screen chemistry of the two leads was already established and they return to their respective roles very easily. The focus here is more on the character of Reggie. It is his story that informs the way that the gang started to lose its focus and leads to their demise. His problems begin to affect his judgement and restraint leading to violence and mayhem. At several points in the fall, if Reggie had stepped up the outcome would have been very different. As it turned out the brothers were not working as the same team that saw them move up in the criminal underworld.

This film may not win any awards for originality but it delivers exactly what its audience is looking for. The drama is tight, the story never lingers too long on any one aspect of their lives and when it occurs the violence is brutal and realistic. Of course, the central performances cannot match the stunning Tom Hardy performance in Legend. That was the only good thing about a movie that promised so much and failed to deliver. Here the film makers ensure that the finished product is consistently entertaining.

Overall, a solid and entertaining follow up to The Rise Of The Krays. The Fall Of The Krays is out on DVD on the 28th of March 2016.