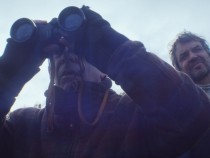 The subject of abuse of children at the hands of catholic priests is again in the public consciousness as the Oscar contender Spotlight is getting a lot of publicity. This expose that formed the basis for the film, sparked off a number of investigations across the globe and more than one feature film has been made recounting the issues. From Chile comes The Club, which tackles the issues from a slightly different angle.

In a sleepy seaside town, there is a special house. From the outside it looks unremarkable but inside its occupants are four disgraced priests and their carer, Sister Monica (Antonia Zegers). All of the men are there due to incidents involving children under their care in their parishes. They are merely guilty of straying from the path of sanctity according to the church. Every day life is structured and controlled with prayer, song and contemplation to the fore. There is an emphasis on repentance for their sins. Into their midst comes a new addition in the form of Father Lazcano (Jose Soza). No sooner has he settled in there appears a stranger outside the house. He has been following Lazcano and is accusing the priest of physically abusing him. The priest cannot deal with this and takes his own life. A young priest is dispatched to investigate the incident and the viability of keeping these men away from the public eye.

It is an intentionally bleak and uninviting film. The subject matter alone makes it a difficult watch. The way the film is constructed adds to the oppressive mood. It is shot in natural lighting conditions which add a starkness to the proceedings. The settings of the house and the beach are cold and washed out giving it a very unappealing look. There is a lack of sun in this town and it is a grey and foreboding place.

The use of a mournful and haunting score only ramps up the feeling of unease that the audience feels. The only break from this is during the clergymen’s singing sessions. Even then, the hymns are all about peace, love and trusting in the church. Bear in mind that the church have hidden these men away here to avoid embarrassment and criminal proceedings only reinforces the hollowness of their words.

The group of actors portraying the priest are all convincing in their roles. They represent distinct types of men. One is quiet and contemplative. He avoids trouble and wants nothing more than to train his pet greyhound. Another is a former Army chaplain who demands rules be followed to the letter. Then there is the obstinate and argumentative one, ready for verbal battle at any time. Rounding of the group is the casualty. A man whose struggles have damaged him to the point of insanity. The common link is the fact that they all think they did nothing wrong. It is all Gods love to them.

It is a difficult film to enjoy but one that pulls you in as you want to know what is going on. What becomes apparent is that no one is innocent and there are several agendas at play here.

Overall, a challenging viewing experience but one that delivers.