The 88th Academy Awards are getting a lot of stick. This year and in 2015, something seems to be missing: non-white nominees. Are non-white movie professionals coming up with award-winning work but being ignored, are there simply not enough award-worthy non-white professionals in front of and behind the camera or is it something else?

The LA Times carried out a study in 2012 to uncover the demographics of the Academy members. The infographic they produced indicated that of the 6000 Oscar voters, over 94% are white, 54% are over 60, and over 77% are male.

According to the United States Census Bureau, in 2014, 77.4% of the population of America is white (defined as those having origins in the original peoples of Europe, the Middle east, or North Africa, or those who have defined themselves as white including Hispanics who describe themselves as white). Compare that to the non-white academy members, and it does seem that there is an imbalance.

Not exactly a fair representation of race.

So are there just not enough non-whites in Hollywood?

Phil Alden Robinson, academy governor stated that, “If the industry as a whole is not doing a great job in opening up its ranks, it’s very hard for us to diversify our membership.”

According to the UCLA’s Ralph J. Bunche Center for African American Studies 2015 Hollywood Diversity Report, studio heads were 94 per cent white and 100 per cent male in 2013.

This lack of diversity in Hollywood is a tough thing to fix. When you try and think about cause and effect, it all begins to feel like a toxic circle of addiction.

The studios will tell you that they are in the business of making movies that people want to see. However, the general public is influenced by buzz and buzz about Oscar nominations. Critics, reviewers, bloggers and actors talk about films in terms of whether they are Oscar worthy pretty much all year round.

Defendants of the Oscars would say that the indie film festivals and the People’s Choice Awards are for the audiences – the Oscars are for the industry professionals. If so, why do we, the general public, give such credence to the Oscars? Is it the mystery of the whole thing? Is it the glamour of the god-like actors and actresses who swish up the red carpet in their gowns and red lipstick? That would make it elitist and shallow and not about the films and I don’t think that is entirely true.

What about the films – were any of them unfairly left out?

The web was awash with articles, tweets and blogs about the fact

that Beasts of No Nation was ignored, and that Idris Elba was not nominated (Paddy Power had the odds of Ibris winning the Oscar at 6 to 1 before the nominations were announced) – similar to the outrage at Selma being ignored in 2015.

The Beasts of No Nation snub is a different thing altogether and hugely interesting. It was the first major original feature film Netflix has released. It made a measly $90,777 at the box office according to www.boxifficemojo.com. Netflix paid $12m for the worldwide rights for the film. Netflix released Beasts of No Nation in theatres and made it available online at the same time.

“Netflix had no faith in its commercial theatrical prospects and put no effort into its theatrical success,” National Association of Theater Owners vice president Patrick Corcoran said, “It was merely PR for the home video, which is usually the only point of simultaneous release.”

I am not sure whether it just happens to have an all-black cast, or whether Netflix knew what they were doing. It has certainly created a degree of interest in the film that might not have happened had it not been eligible and had it not featured an all black cast. Will it stop people watching Beasts of No Nation or make them go looking for it on Netflix? How many times has Netflix been mentioned in the media and online since the nominations? Is there any question of whether or not Netflix encourages diversity? How much buzz has been created about Beasts of No Nation?

Netflix, unlike The Oscars, or indeed, Hollywood, is thinking way, way, way into the future. It is a strategic company that knows its audience. It makes a point of understanding audiences in a digital age- its decisions made on the algorithms of its users. It gave director Cary Fukanaga creative freedom and the final cut on his film. Perhaps Netflix knew that it would never win an Oscar, but that it would create controversy and capture the attention of filmmakers and audiences. I would say it succeeded.

Two other movies that were well received by critics and audiences and were in the top 50-grossing films of 2015 (Creed and Straight Outta Compton) had no nominations for any of the black people involved in making them. Sylvester Stallone is nominated for Best Supporting Actor for Creed, but none of the black writers, directors or actors were. It is the five white writers who are nominated for Best Screenplay for Straight Outta Compton, a film full of black actors, directors and crew. There were comments about Samuel L. Jackson being nominated for the Hateful Eight, but I couldn’t argue a case for that – he was good, but there was nothing outstanding about his performance.

I think Straight Outta Compton was full of energy and an 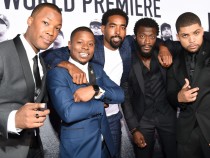 incredibly watchable movie. Creed I thought was enjoyable, but I can’t say I would have nominated anyone for an Oscar for it, but that is my opinion and it is not shared by everyone. And that is the thing. It is about personal preferences. Members simply vote for what they liked best and they are under no-obligation to watch every film released.

Many of the members are over a certain age, and they are typically conservative. It could be argued that the content of some of the more controversial films or films centered around youth culture are just not that appealing to them. You can’t help but consider this when films like Titanic, Cabaret, Driving Miss Daisy (for which Morgan Freeman won a Best Supporting Actor Academy Award), Oliver, The English Patient and Shakespeare in Love win Best Picture.

It is why it is no surprise that a film like Brooklyn is nominated. I liked Brooklyn, it was a good film, but it was extremely predictable and Saorise Ronan was the only thing that gave it depth. It was nice, and that is why it will probably win a couple of Oscars. Look back at Oscar winners of the past and you see sweeping romances during wartime, murdered heroes, sinking ships, fantasy adventures, touching relationships and musicals. Not murderous boy soldiers or rappers.

In June 2015, the academy invited 322 new members in “a normalization of our membership,” President Cheryl Boone Isaacs, said at the time, “For a little bit here we had a quota system, a limit of membership. We thought we were missing out on talented folks that come from all different areas. We lifted that and we have seen an increase in gender, color, age, nationality.”

The reason the US Census Bureau reports were so newsworthy is that they reported that based on current rates of growth, whites in the under-5 group in America are expected to tip to a minority this year or next. This means that in about twenty years’ time there will no longer be a white majority in the US.

Unsurprisingly, the UCLA’s report mentioned above stated: “increasingly diverse audiences prefer diverse film. Relatively diverse casts enjoyed the highest median global box office receipts and the highest median return on investment.” The success of films like Straight Outta Compton, Creed and the Fast and the Furious are a testament to that.

There is such a thing as a tipping point, and the Oscars may need to keep their eye out for it. The movie industry is an industry built on buzz. It seems to me that the recent buzz from most media outlets is tipping on the side of calling the Academy Awards at best dated and at worst racist. All that would need to happen is for some of the kids in the know to get behind another awards ceremony (or another way of watching film) that is more diverse, more culturally relevant and more exciting than the Oscars and it will find it is no longer revered.

In this toxic relationship, it is the media-savvy young public who are fickle. In twenty years’ time, it may only be middle-aged people like me who will think back sadly on the Oscar ceremonies of the past. Younger audiences won’t think of them at all.

This might be cold comfort for the non-white people currently working in Hollywood, but at least it means there is hope for diversity in film, if not for the Oscars. If we are to judge the potential for progress for diversity against the progress of fair representation of women in Hollywood, we are looking at a very bleak picture – but for whom?