Modern horrors can be compared to Ghost Trains at the carnival. They may make you jump but chances are you’re more likely to laugh after the experience than to leave the ride in fear. The use of jump scares are usually effective however false jump scares can be tiresome. Robert Eggers disposes of cheap tricks in The Witch, instead tapping into a primordial fear and relying on visceral imagery to get into the heads of audiences.

While The Witch is a beautifully macabre film to look at, it is more likely to leave you feeling uncomfortable that frightened. Eggers constructs each scene of his post-colonial film with wonderful detail as he invites us into the lives of a 17th century Puritan family. They’re God fearing folk who suspect that evil lives in the woods, a fear that is exacerbated by the sudden disappearance of the baby Samuel. The mother Katherine (Kate Dickie) blames the eldest child Thomasin (Anya Taylor-Joy) for Samuel’s fate, although the missing child is the least of their worries. 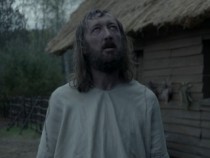 Mysterious ailments fuel suspicion as Satanic Panic grips the household. It’s not clear who, if any, of the children are in league with Satan but Eggers doesn’t hide the very real witch that exists in the forest. The story gradually simmers until boiling point resulting in a gruesome third act that will have you squirming in your seat.

The performances are brilliant with Taylor-Joy and Dickie excelling in their roles. The small confined setting brings them in constant conflict to the benefit of their acting talents. It can be a bit difficult to follow the dialogue at times due to ye olde language however the story is simple enough to follow and shouldn’t be distracting from the plot.

The ending is abrupt and although may not be satisfactory to all, Eggers provides a suitable conclusion. The Witch isn’t an exciting film, nor is it a terrifying one. It is worthy of your time and although it takes a while to get going, Eggers delivers an interesting tale and a refreshing take on a classic legend.