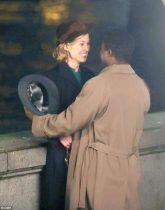 The 60th BFI London Film Festival has announced that this year’s Opening Night gala will be Amma Asante’s A United Kingdom, the true story of Seretse Khama, King of Bechuanaland (modern Botswana), and Ruth Williams, the London office worker he married in 1947 in the face of fierce opposition from their families and the British and South African governments. The film will receive its European premiere on Wednesday 5 October at the Odeon Leicester Square, attended by cast and filmmakers with Asante, David Oyelowo and Rosamund Pike expected on the red carpet. There will be a live cinecast from the London event and simultaneous screenings taking place at cinemas across the UK.

A United Kingdom is directed by Asante  from a screenplay by Guy Hibbert , based on the book Colour Bar by Susan Williams. The cast is led by David Oyelowo as Seretse Khama with Rosamund Pike playing his future wife Ruth Williams. Other cast includes Jack Davenport, Terry Pheto, Tom Felton , Arnold Oceng, Jack Lowden  and Laura Carmichael.

Clare Stewart, BFI London Film Festival Director, says: “Amma Asante’s A United Kingdom is testament to a defiant and enduring love story that also reveals a complex, painful chapter in British history. We are proud to be opening the 60th BFI London Film Festival with a film of such contemporary relevance, one that celebrates the triumph of love and intelligence over intolerance and oppression, and that confirms Asante as a distinctive and important British filmmaker.”

Director Amma Asante comments: “It’s a great privilege that A United Kingdom has been selected as the Opening Night Film of the BFI London Film Festival. The Festival means a lot to me personally, having showcased my very first film, A Way of Life, here and been honoured with the UK Film Talent Award. I’m a proud Londoner and in A United Kingdom we’ve been able to film in some of the most beautiful parts of the city as well as in the wonderful landscapes of Botswana.”