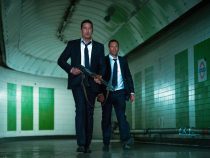 In association with Premier Comms we are giving you the chance to win a copy of London Has Fallen on Blu-Ray. Following the global success of Olympus Has Fallen, Mike Banning is back and he’s bringing his Presidential bromance across the pond with London Has Fallen.

Another year, another city, another threat to President Benjamin Asher’s life… When a terrifying plot comes to light during a State Visit to London, Secret Service muscle and all-round tough guy Mike Banning must once again do whatever it takes to rescue his beloved POTUS – and the free world. On foreign turf and with seemingly no-one he can rely on (save for a feisty MI6 agent), the odds are stacked against Banning, with even President Asher forced to step up and help save the day. The film stars Gerard Butler, Aaron Eckhart, Angela Bassett and Morgan Freeman.

Where in Scotland was Gerard Butler born?

Please send your answer to competition@moviescramble.co.uk with subject London Has Fallen. Please include your name and postal address. The competition will close at 12:00 pm on Monday the 18th of July 2016. Moviescramble will not pass on your details to anyone else.

London Has Fallen is now available on digital platforms and will be available on DVD and Blu-Ray from the 18th of July.