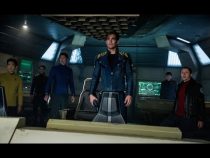 It was suggested in some quarters that Star Trek Beyond had something to prove. The previous film, Into Darkness, was a massive commercial success but faced a fierce backlash from a lot of fans for a number of reasons. There is a core of fans that do not appreciate the way that the film series has been driven under the influence of JJ Abrams. The emphasis on action and the reuse of the whole Khan story line moved some of these people to vote for the film as the worst in the entire series. With Justin Lin now in the directors chair after the Star Wars influenced departure of Abrams and Simon Pegg on script duties, the naysayers were once again out in force decrying the loss of their beloved property. As with so many things, they should have waited until the final product before passing judgement.

The Enterprise is two years into its mission and the lack of adventure is starting to get to Kirk. There is not much seeking out new life and new civilisations going on. Arriving at the newly commissioned spaceport, Georgetown, it isn’t long before Kirk is summoned by the commander to give his opinion on an urgent matter. A space ship is stranded within an uncharted nebula. One member of the crew was able to escape and the Enterprise represents the best chance for a successful rescue mission. Of course nothing is really what it seems. Once deep in the nebula Enterprise is attacked by a swarm of ships resulting in the crew incarcerated and the command team stranded and hunted on a hostile planet.

The film follows on nicely from the previous outings. With the characters and the dynamics already well established we are thrown into the action from the very start. The plot is not the most complex you will see this year, but that has been superseded by an emphasis on the development of the main characters. The primary focus is the relationship between Bones and Spock who are having to work together under extreme circumstances. The Dr. McCoy character had little to do in the previous film and it is a pleasure to see him get more screen time. His character has never really been developed. So it was good to see him having a lot a more to say and do. The relationship with Spock is not a terribly complex one on the surface. There is mutual admiration cloaked in cutting remarks and (in Spock’s case) raised eyebrows which come to the fore during their exchanges. Although Kirk is still front and centre it is good to see this relationship on screen.

And so to the spectacle itself. Justin Lin has already proven himself as a director who can handle the big franchise movie. He handles the Star Trek universe with ease. His style is less visually flashy than Abrams. So the screen flares are gone completely. This is the only real difference. He handles the action sequences very well and they are presented in a way that allows the audience to fully grasp what is going on even though the pace is fast. He even has an opportunity to get a motorbike in on the action at one point. In a film that has a large cast there will always be losers in terms of screen time. For this film the characters of Uhuru, Chekov and Sulu all lose out in terms of involvement. Trying to appease everyone would have led to an overlong and slightly bloated film.

As noted above the plot will not stretch you. The script on the other hand is a delight. There is a great deal of humour which is no surprise given that it in part comes from the pen of Simon Pegg. He is steeped enough in the Trek universe to include a number of references to previous missions and adventures. Sure there are holes in the plot but there is always enough going on to keep you entertained. The antagonist of the piece, Krall (Idris Elba), is a case in point. He comes across as being a memorable villain but when you actually look at his motivations and actions it falls apart a bit. He spends one scene explaining what he is going to so that the crew of the Enterprise know what to do in order to stop him!

So, not the best Star Trek film, but it is certainly up there in terms of style and action.