The dry, barren and desolate landscape of the desert often stunts any growth or hope of life, and yet it is these very features that have made the desert such a brilliant setting for a growing number of blockbuster films over the years. From the plains of Jakku seen in the recent Star Wars: Episode VII: The Force Awakens to the sands of Arabia in Lawrence of…, deserts have proven a vast, ominous background on which to paint the insignificance of humans on the big screen. 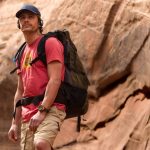 Based on an utterly incredible true story, 127 Hours follows canyoneer Aron Ralston’s (James Franco) trek across Utah’s Canyonlands National Park and his subsequent 127 hours of entrapment by a boulder in an isolated slot canyon. Danny Boyle, who wrote and directed, decided to use independent found footage from the perspective of Aron’s video camera to build a daunting sense of isolation and doom whilst his arm is trapped in the boulder. The desperate measures that Aron resorts to in order to survive are truly horrifying and earned the film six Academy Award nominations. 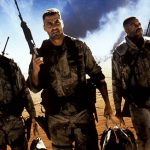 Three Kings is David O. Russell’s satirical black comedy war film starring George Clooney, Mark Wahlberg, Ice Cube and Spike Jonze as four U.S. soldiers on a gold heist that takes place during the 1991 Iraqi uprising against Saddam Hussein, post-Persian Gulf War. However as they are about to make their getaway they come across a group of Iraqi prisoners who desperately need their help. The prisoners are freed, but Iraqi Republican Guard reinforcements soon arrive to thwart the escape of the Americans and their new rebel friends. 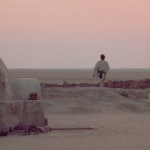 Whilst The Force Awakens could also feature in this list of top movie deserts we went for the original’s vast sands of Tatooine. These scenes were filmed in the Sahara Desert in Tunisia, and feature droids R2-D2 and C-3PO being captured by Jawa traders and sold to a young man named Luke Skywalker. Seeing the footprints in the sand leading from the crashed lifepod will live long in the memory. 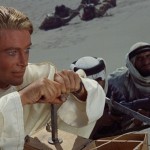 Perhaps the most infamous film set in the desert and one of the most critically acclaimed films of all time, Lawrence of Arabia is the historical epic starring the legendary Peter O’Toole in the titular role. Based on the real life of British author, archaeologist, military officer and diplomat T. E. Lawrence, the film sees Lawrence successfully unite and lead the diverse and often warring Arab tribes during World War I in order to fight the Turks. The film won seven Academy Awards, including Best Picture and Best Cinematography, for its fascinating depiction of the mythic Lawrence amongst the beautiful Arabian deserts. 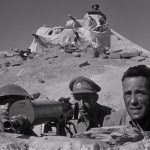 This 1943 Humphrey Bogart war drama follows Sergeant Joe Gunn (Bogart) and his American tank crew, who pick up a motley crew consisting of five British soldiers, a Frenchman and a Sudanese man with an Italian prisoner whilst crossing the Libyan Desert to rejoin their command after the fall of Tobruk in WWII. Their biggest threat is the lack of water but having finally found a well, they have to deal with advancing Nazis who are also in dire need of water. Rather than flee however, they decide to stand their ground and face the battalion strength enemy.

A Hologram For The King 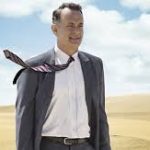 Academy Award winner Tom Hanks is a desperate man searching for a way to get his life together in a strange and foreign land in A Hologram For The King. Washed-up, desperate businessman Alan Clay (Hanks) is sent on a business trip to a building in the middle of the Saudi Arabian desert where he hopes to sell a state-of-the-art 3D holographic meeting system to the nation’s King. Adapted from Dave Eggers’ novel of the same name, A Hologram For The King marks the second collaboration between Hanks and visionary director Tom Tykwer following their pairing on Cloud Atlas. With another tour-de-force performance from cinema’s greatest everyman at its heart, the film serves as inherent evidence that sometimes you have to change your scenery to change your life.

One thought on “Six Of The Best: Movie Deserts”