The outrage over the decision to cast Tom Cruise as Jack Reacher didn’t reach the venomous heights of the war of the Ghostbusters but it did irk a few fans. Whether the die hards were won over or not didn’t stop the film being  a box office smash and now Tom Cruise has returned in Jack Reacher: Never Go Back.

After taking down a human trafficking ring in his spare time, Jack Reacher travels to Washington to meet with Major Susan Turner (Cobie Smulders) who has been assisting him in his vigilante  investigations. When he arrives at his old military headquarters, he’s dismayed to find that Turner has been arrested for espionage. Having his doubts, Reacher ruffles some feathers and soon finds himself a murder suspect. If that wasn’t bad enough he’s informed that he may be the father of illegitimate 15 year old Samantha Dayton (Danika Yarosh).

The idea of Jack Reacher as a deadbeat dad provides some humour but it puts strain on the script. With Reacher, Turner and Dayton on the run, the trio play a dysfunctional family in the most clichéd manner regardless of the fish out of water premise. Reacher often comments that he works alone and with so many sidekicks, you can’t disagree with him.

The first half is great with Cruise’s stoicism nicely replacing his usual charming smiling good guy hero. His lack of quipy one liners are noticeable by their absence however he proves he can still pack a punch and look a million bucks while doing so. 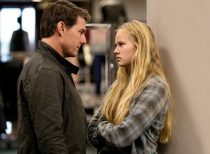 Unfortunately, the plot starts to drag towards the third act with a convoluted story about military corruption that feels secondary to the family road trip. Patrick Heusinger’s The Hunter is walking evil but there’s little chemistry between him and Cruise and not enough development in the script to make us care about their final showdown.

As action films go, Jack Reacher: Never Go Back is forgettable and regrettably not as fun as its predecessor. The homages to early 80’s action heroes are sparse with the titular character not giving the time to shine in his badassery as he did last time around. It’s worth a watch, just don’t expect much.