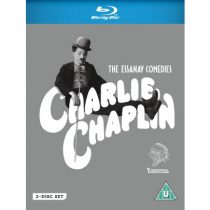 In 1914 Charlie Chaplin broke the mold for film stars. Up until that point stars were part of a roster on the film studios payroll and they had little control over the final product delivered to the masses. Chaplin signalled his intent by leaving the Max Sennett’s Keystone pictures and signed a one year deal with Essanay studios. As well as a significant fee for his services the deal also meant that Chaplin retained full creative control over his product. Up to that point he was involved in more than just acting, but now he had a hand in almost every aspect of the production. The new Blu- ray collection from the BFI collects the films made over this period.

The set brings together the sixteen single reel films made over the course of the contract. They include some of his best known work including his seminal work, The Tramp. With the control he exerted over the films Chaplin was able to create some ambitious spectacles. He noted that the slapstick films were starting to get a bit tired with so many film makers following the same formula. What he did was to introduce different elements into the sub thirty minute films which added to the spectacle rather than repeating some of the same routines.

The main character although similar to his previous outing s was able to convey a lot more humanity. Sure he could carry on with the wild antics of the knock about Sennett comedies but he added some subtle elements that endearing the character to the audience. Adding drama and romance to the films meant that the audience sympathised with him a lot more and resulting in his popularity increasing. 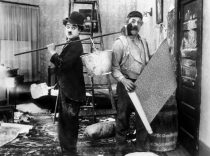 What is apparent from these films is the incredible work rate that Chaplin forced upon himself. To produce so many films to such a high standard and still entertain over a century later is a feat of genius. Some of the films follow a similar pattern with the main character getting into a situation of his own making, trying to impress a girl and then failing spectacularly to achieve his goal. The sight of the tramp trudging down the road to his next adventure signalled failure but an optimism for the what was just around the corner.

Chaplin’s physicality plays a large part in his on screen success. It is quite remarkable the lengths he went to in order to get the right shot, and achieve the desired effect of a laugh from the audience. The films are all choreographed brilliantly and there is so activity from Chaplin and the supporting cast in every scene. The first couple of films in the collection see Chaplin team up with Ben Turpin, who was up until that point the main star at Essanay. The duo work well together and there is a real sense of comic timing between them. Unfortunately Turpin didn’t get on well with Charlie in real life and the promising partnership only last for a few films.

My personal favourite from the collection has to be The Champion. It has everything that made Chaplin memorable from the use of a bulldog as his companion to the boxing scenes with the oversize gloves and ill fitting kit. It is a real delight from start to finish.

Charlie Chaplin: The Essanay Comedies is available now from the BFI.