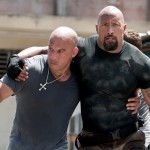 Potentially my favourite Fast and Furious movie, for two reasons – one, we are introduced to the character of Hobbs (and I fall in love with the Rock), and two, the bank vault heist is one of the best scenes in action-movie history. Meticulous: the vault is stolen from the bank in a smooth operation that flows perfectly. Pure brute force: the heavy vault is pulled along by super-powered cars, smashing everything in its path to pieces including cement boulders, street lamps, cop cars, cops and trucks. An incredible finale: Dom slingshots the vault, sweeping up a procession of cops, South American gangsters and politicians. 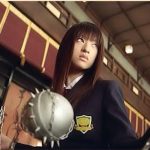 Absolute fantasy, but expertly choreographed with the right comedic tone meaning it is achingly cool. It starts with Gogo Yobari in a school uniform, swinging a ball and chain, taking on Uma Thruman as the Bride in her iconic bloodstained yellow suit. In true Tarantino style it goes on for a full ten minutes. There is choking with exaggerated sound effects, iconic chain motifs, school shoes dripping with blood and that’s before the crazy 88 show up. You got it, 88 crazy Kung-Fu experts in suits and masks, with samurai swords dancing around the Bride as she slices them from top to tale with unrivalled moves, killing several men with one slice of her sword, back-flipping, plucking out eyeballs, dismembering, catching thrown knives in her hand, and seemingly slowing down time. There’s a funky chain slinking soundtrack, deliciously gory sound effects, spraying blood and flying body parts as Tarantino lives out his ultimate fantasy by having a woman with bare feet killing the shit out of everyone.

The Raid 2 – The Warehouse 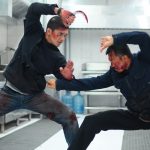 In Indonesian action film The Raid, a SWAT team becomes trapped in a block of flats, home to a powerful and cruel drug lord and his gang. With limited ammunition, they fight their way out. In the Raid 2, the men behind the criminal gang want revenge against rookie cop Rama (Iko Uwais) and his family, so he must stop them. The finale where Rama drives into a warehouse and takes on a few hundred bad guys is up there with the best fight scenes on film. It has a rawness about it, with guttural groans you can almost feel, and fighting that seems much more realistic than modern action violence. There’s a focus on body-on-body combat, but Uawais’ intuitive use of props is very like Jackie-Chan’s style (without the humour). The shaky camera movements and fast-motion shots make it all feel very instant, as does the lovely sounds of bones crunching. There’s the iconic corridor scene, as there often is, but this one involves a street kid with a passion for baseball and a girl with sunglasses and hammers. The fighting has a rhythmic quality and proves that you don’t need special effects or big budgets when you have talented fighters, choreographers and cameramen. Then there’s the breath-taking kitchen fight involving blades, bottles and steel, proving that Kung-Fu is as relevant and thrilling to watch today as it ever was. I can assure you your hand will be over your mouth. 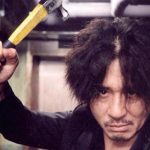 Oldboy of the Vengeance trilogy is a film that you will remember for a long time afterwards. It is graphic and violent, with a twist as shocking as any of the gore. Min-sik Choi’s performance and the unrelenting violence of the revenge he seeks brought South Korean cinema to the attention of the western world. It is also an engaging story that will have your heart pounding. The scene in the corridor is shot in one continuous take. Dae-su Oh, world-weary and tired, seems slow but unrelenting. The camera follows him step-by-step as he makes his way past a number of men armed with sticks. This is not so much an example of expert fighting, but of endurance, of man’s ability to keep moving forward despite the blows he takes. Dae-su Oh’s fighting is imperfect, he misses his targets, he is beaten to the ground, but he continually rises again with a seemingly inhuman strength proving that revenge is a beast that cannot be killed until it is has eaten. And yeah, I’d like to know how he killed all those dudes in the elevator too.

The Matrix – The Lobby 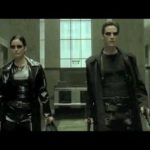 Arguably, Keanu Reeves at his best, surprising everyone with his new action movie star status and martial art moves. Put that together with a full-length trench and Neo’s wonderfully shiny leather suit, sunglasses (there’s a theme developing) and a gun in each hand, and it’s all kinds of awesome. Slow-motion shots of walking on walls, side-flips, one-handed cartwheels while shooting, bullets flying through the air like a sandstorm, and that Karate Kid move to finish it off. 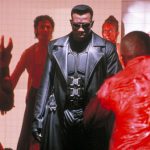 Taken to an illegal rave in a meat factory… a young douchebag is about to taste the irony – or is that be tasted? To the banging soundtrack of a pumping reconstruction of New Order’s Confusion, the kid thinks he has hit the jackpot when he finds himself surrounded by beautiful women. And then the blood sprinklers come on and he realises that he is the jackpot. The only thing that could spoil such an orgy of bloodthirsty vampires is a buckled up Wesley Snipes with big boots and a submachine gun, obliterating vampires into confetti-like pieces. It’s not only a shoot-out; there is some flawless sword fighting, expert blade throwing (of course), fly kicking, and somehow, a vampire stapled to the wall. 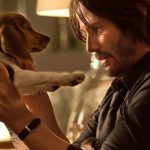 Keanu Reeves is back in a killing spree, this time as John Wick, and we have never been so glad! The funky little percussion baseline of Think by Kaleida is somehow the perfect interweaving accompaniment to Reeves chasing Alfie Allen around a nightclub in a towel. The killing starts quiet and subtle, Reeves looking into the eyes of his foes to let them know it’s personal. You get the sense that that rhythmic beat of the intro stays with Reeves despite the noise and panic in the club as the fighting reaches a crescendo. He is one man who is not in the least bit panicked, despite being shot and stabbed and his target on the run. There’s something teasing, hot and darkly unnerving about the ease of it all.

Kingsman: The Secret Service – the church 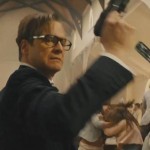 OK, so at moviescramble, we often have differing opinions, except with Kingsman. It’s unanimous. My mum would have kittens seeing Mr Darcy saying the f-word and killing hundreds of people, I kind of did too, but it’s legendary cinema. Harry Hart (Colin Firth), as suave as can be in a tailored suit and glasses, is triggered by a signal put out on mobile phones by maniac Valentine (a squeamish Samuel L. Jackson) who’s just trying to protect the earth by cutting down the population a bit. What follows is a crazed rampage involving a church full of self-righteous bible-lovers and one expert Secret Service Agent, displaying his talents using every prop imaginable. Firth is unflinching, his pursed lip doesn’t move as he expertly takes out several hundred people in the throes of a violent frenzy. All his gadgets are put to the test, bombs are dropped; people are blowtorched, skewered, stabbed, smashed in the head with hammers, poles up their windpipes and thrown out windows. He’s a little out of breath at the end.

Return Of The Jedi 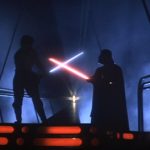 Luke Skywalker takes on his dad (Darth Vader) in possibly the most re-enacted fight scene in history. Little boys and girls (and big ones) like nothing better than holding imaginary light sabers and making electronic noises as their swords of light clash in mid-air. Luke is the light side of the force and Darth Vader the dark side, and one side must win. With the force, there is a kind of telepathic manipulation expressed only through Mark Hamill’s eyebrows as Darth Vader reads his mind to find his weaknesses. The Emperor’s gleeful goading every time Luke overpowers his father has you torn between wanting him to win, and wanting him to stay on the good side. The music is dramatic, the execution of the lines even more so, and the finale just a little emotional.

They Live – The Alleyway 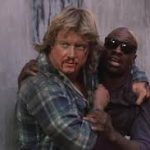 In John Carpenter’s 80s action movie They Live, Roddy Piper as Nada comes across a pair of sunglasses that give him the power to see that the earth has been taken over by aliens and we are all slaves to them. He can also kick ass. In an alleyway, he tries to convince Frank (Keith David) to put on the glasses. Frank takes a little convincing. It’s a straight up dirty street fight with lots of brute force, punching and blood. Nothing is off limits, including biting, knees to the groin, wooden poles, and broken glasses. It’s a right good rough and tumble, and you can’t help thinking, just put the bloody glasses on for two minutes mate.

These are by no means the only fight scenes we love and we decided on this one not to go into Marvel or DC Universes, war movies or TV. But feel free to make a suggestion…