When you think of a female action star in Hollywood, there’s one name that continues to pop up; Michelle Rodriguez. After bursting onto the scene at the turn of the century with her acclaimed indie film Girlfight, she has gone on to establish herself as one of the greats at kicking-ass and taking names.  Since her breakthrough she has continued to impress with action-packed performances in some on the biggest, most breathtaking films of all time, including Avatar and the incredibly successful Fast and Furious franchise.

Now starring in Tomboy from action movie icon Walter Hill, Rodriguez proves that she’s still got what it takes to carry a film and deliver an almighty punch, as she searches for revenge from a crazed surgeon played by Sigourney Weaver. To celebrate the release of this unique and gripping action-thriller to DVD from 3rd April, take a look at a few of Michelle Rodriguez best films. 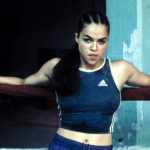 It is not every day that an actress’ first time on screen happens to become an indie hit, but Rodriguez knows how it feels to be an instant hit. Rodriguez plays Diana, a tough 18 yr old who finds herself training to become a boxer courtesy of the local boxing trainer, Hector. Complications arise when she falls in love with another fighter who happens to have a girlfriend, making it harder for her to dedicate her energy to the sport she has come to love. With a disapproving father looming in, Diana must come to terms with the world she is living in spite of all the darkness that surrounds her. This film would begin her long-standing career of portraying beautiful women who could also kick some ass.

The Fast and the Furious Franchise (2001-now) 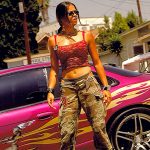 With the most recent film grossing in over $1 billion in the box office, this franchise has proved to be on e of the most successful in Hollywood history. Featuring fast cars, explosions and terrific acting, it is no wonder that the Fast and the Furious films have been a staple in Rodriguez’s career. As you probably know by now, the films follow a group – or family as they call themselves – as they chase down some of the biggest criminals using high speed and expensive cars. With a total of seven films and the eighth to be released this spring, Michelle Rodriguez stars as highly skilled street car racer, thief and Vin Diesel’s lover Letty. It’s hard to imaging these films without the snarling Rodriguez outrunning everyone that comes into her path. 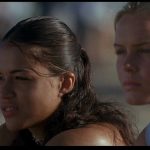 With big waves comes big responsibility, which is what should have been the tagline for this early 2000s surf classic. Following three best friends who have a passion for the deep blue, they begin to challenge the status quo that men are the only ones who belong in the water. Armed with just a surfboard, they tackle some of the biggest waves to reach the Hawaiian coast proving that pure love for the sport is all you need. With a strong bond between the girls, it seems as nothing will be able to break it, with headstrong determination. With friendship, romance and even a little action, you’ll be hard done by to find a young independent woman who wasn’t influenced by this seriously underrated flick. 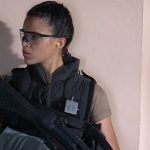 Though technically originating from a beloved 70s television show, this film adaptation was a rare success with fans when transferring to the big screen. Rodriguez’s presence is key to this as what makes this film refreshing was that amidst the squad of fearless male cops, there stood a woman who was just as badass. In the film, the team are given the task to transport one of the world’s most notorious criminals and the stakes become higher when he publicly puts out a cash reward for anyone who breaks him out of custody. Featuring an all-star cast alongside Rodriguez including Samuel L. Jackson, Colin Farrell, Jeremy Renner and LL Cool J, this crime thriller will make you wanting to quit your day job and becoming a member of your local S.W.A.T. team. 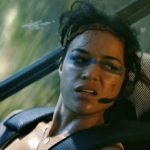 After Avatar dominated the worldwide box office, I’m pretty sure almost everyone wished they could live on the moon Pandora. This blockbuster not only made over $2.5 billion since its release but was also raved by the critics and received three Academy Awards. Jake Sully is a paraplegic, ex-marine who has the opportunity to get his legs and life back when he is given a mission in the futuristic world. After creating his avatar, he becomes immersed in Pandora, caring deeply for it and its people. When he falls in love with a Pandora native, he begins to realize the destruction Pandora is facing due to the people he is working for. Teaming with the natives and rouge soldiers – including Trudy Chacon played by Michelle Rodriguez – they join a war against everything he has ever believed in for his newfound realization. With mind-blowing special effects, this film takes you on a journey to an incredible land you wished existed. 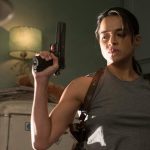 What becomes of the world’s most lethal assassin when his entire identity is radically changed by a crazed surgeon? Rodriguez stars in this action thriller as Frank Kitchen, an assassin who gets captured by the sister of a man he once killed. Known as ‘The Doctor’ (Sigourney Weaver), she transforms him on her operating table from a man to a woman, making a huge psychical and psychological impact on her life-long enemy. Abruptly given this new identity, Frank has to come to terms with his sex-change, and figure out how she will exact revenge on The Doctor who fails to realise that Frank has become even more deadly than ever before.