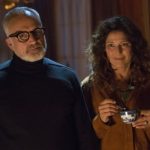 Cinema has long been fascinated by the allegedly taboo subject of inter-racial romance. You only need to look at the stir that Guess Who’s Coming To Dinner? caused upon its release to know this. Jordan Peele’s latest film, Get Out, can safely be described as a far more terrifying version of the 1967 classic.

The opening sequence makes you feel uneasy right from the start. A young black male walks down a suburban neighbourhood at night, unsure of where he is going. A mysterious white car (see what they did there?) pulls up alongside him with menacing intent. The Flanagan and Allan tune, “Run Rabbit Run” plays out over the silent streets. Never has this twinkling tune sounded so sinister.

From here, the story unfolds.

Get Out stars British acting talent Daniel Kaluuya and Allison Williams as a young couple, Chris and Rose. He is set to meet her parents for the first time during a weekend away. Chris is apprehensive as he is “the first black guy” Rose has brought home to her parents and “these things matter”. Their journey to her parents’ house sets the tone for the film. They hit a deer – it literally comes flying out of nowhere – and inform the police of their collision. The policeman who arrives on the scene is incredibly hostile towards Chris. So far, so racist.

Rose’s parents (played by Catherine Keener and Bradley Whitford) initially seem amiable enough. Although, they do make a point of heavily overcompensating their non-racist credentials by telling Chris how much they loved Obama and that Rose’s grandfather used to train alongside Jesse Owens. But, the whole time, Peele creates this really uneasy atmosphere, and you feel on edge waiting for the next jump scare.

Her parents have two black housekeepers, Walter (Marcus Henderson) and Georgina (Betty Gabriel), and Chris immediately notices something isn’t right with them. They seem robotic, or like they are heavily medicated.

Peele doesn’t exactly keep you guessing as to what is going on at the family home. The scene where Missy (Keener) hypnotises Chris is particularly powerful. Kaluuya really does put in an intense performance; sweating, crying and utterly powerless. Many have noted how important it is that Missy uses a silver spoon – literally a sign of privilege – to put him under.

The scenes in which the family garden party takes place are so awkward they will leave you cringing. The (all white) guests stare at Chris, admiring his 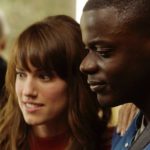 strength and physique. They reiterate stereotypes by suggesting he must be good at golf or running. It’s all very uneasy. Many people have called this cinema ‘post-Trump’ in its vision of segregation. For me, it goes even further. The way the guests eye up the leading man is reminiscent of when African men and women were paraded in zoos for white people to come and admire their speed and muscles. The fact that one guest asks Rose if Chris’s penis lives up to the black stereotype also underlines white male fear of ‘once you go black’.

Critics have suggested that it all gets a bit silly in the last 15 – 20 minutes or so. Perhaps it does to some. Chris literally has to fight for his life so the scenes, for me, are justified. In committing his acts of extreme bloodshed, however, he becomes the archetype of the “black beast” that Rose’s brother alludes to previously in the film. American history also cast African males in this ferocious role, too.

Peele does a brilliant job of creating a tension so real and palpable you can almost touch it. The initial suggestion that the family are just silly, middle-class white people who don’t know how to mingle with African Americans is so rapidly thrown out the window for something entirely more sinister and more than alludes to the slave trade and 1950s domestics (as seen in films such as The Help). The writer-director manages to create a film that is all about the gaze: the white gaze over the black male and the fear of being watched. He also manages to play around with black cinematic stereotypes, such as Chris’s hyperbolic best friend, Rod (played with aplomb by Lil Rel Howery). It’s a really well-crafted thriller.

Get Out might not provide the rallying cry against The Donald that some cinema-goers might expect it to be, but it’s an incredibly provocative piece of cinema nonetheless.