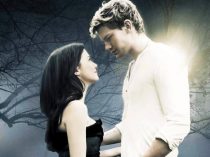 Success can be a very dangerous thing. Within the movie industry success is measured by the bottom line. Just how much a film can deliver in terms of box office. With the runaway success stories of The Hunger Games and Twilight film studios have been falling over themselves in the search for the next lucrative YA (Young Adult) franchise to keep the coffers full. The results have been mixed to say the least. Arguably Divergent was the closest in terms of return but that has seen its fortunes diminished with the final part consigned to a TV movie and  losing its main stars as a result. The latest attempt is Fallen which is based on a series of massively successful novels by the writer Lauren Kate.

A troubled young girl, Luce (Addison Timlin), is sent to a reform/ prep school that specialises in helping teenagers that have issues and problems. Back home she was involved in an incident that ended with the death of a boy she was with. The school, named Sword and Cross, is the last option for her. At the school all is not all it seems. In addition to the other troubled kids there is a faction of the school body that is distinctly separate from the others. Luce is instinctively drawn to them, especially the two brooding males of the group, Daniel (Jeremy Irvine) and Cam (Harrison Gilbertson). It transpires that they are actually fallen angels who had been banished from Heaven. As memories of her past encounters return to her she must choose who she loves while a battle between heaven and hell rages on.

The problem with the film is one that is all to familiar with the first film in a modern franchise. There has to be a balance between introducing the recurring characters in such a way that it feels natural and actually telling a coherent and interesting story. Unfortunately the film struggles to achieve either. For a start the film is only ninety minutes long.

The first hour is taken up with introducing Luce and the supporting characters. Not much in terms of plot development takes place and it feels a little slow moving. There are too many shots of brooding teenagers which are supposed to add atmosphere but in fact are just a distraction. Contrast this with the final thirty minutes that throws all sorts of stuff at he screen in the hope that something will stick. It feels rushed and doesn’t make a whole lot of sense. The film could have done with at least another act to allow the smooth transition to the final action sequences. The ending ,for what it was, was not earned in any way. It felt out of place and totally unsatisfactory.

Of course this film is trying to set up a franchise and it always has one eye on this at all times. What this does is to reduce the tension and removes any stakes. There is no real sense of danger at all as the characters are set up in such a way that tells the audience that they will be around for a very long time and that there is a lot more to their motivations that will be highlighted in future instalments.

I find it hard to believe this franchise has the support to see further movies coming in the wake if this. Yes, there is a lot more story to be told but there needs to be a very strong initial movie to make that happen. Look at Twilight for instance. The first movie was a success in its own right without the need to keep everything open for the future. The progression to the sequels felt natural which is something that is lacking with Fallen.