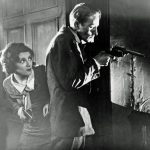 I’ve seen my fair share of silent films – Metropolis, Battleship Potemkin, Nosferatu … Hell, even The Artist. But I would profess to be neither a raving enthusiast, nor remotely knowledgeable about that particular era in cinema. Whilst the films I have listed are generally regarded as classic, silent cinema (for me) conjures up the notion of archetypal damsels in distress, moustache twirling villains and frantic piano playing. It wouldn’t be my first choice.

So, unbeknownst to me, when I volunteered to review The Informer, that I would be watching a silent film. The film in question is an Elstree Studios production from 1929, directed by Arthur Robison, and the first half is shot as silent. I thought I was set up to watch the 1935 version, directed by John Ford and starring Victor McLaglen. It didn’t occur to me that the original film would suffer the same fate as many popular silent films – remade in glorious sound and technicolour as soon as the new era of cinema was ushered in.

Either way, the story and characters remain the same. The portrayal of both, however, is completely different. Based on Liam O’Flaherty’s novel, the silent thriller is set among a group of *ahem* revolutionaries in the newly-established Republic of Ireland. Francis McPhillip (Carl Harbord) accidentally kills the Chief of Police and is forced to go on the run. His attempts at returning to Dublin do not run smoothly as betrayal and paranoia flood the streets of the emancipated Eire.

I settled down to watch the BFI restored version, complete with a new score from the acclaimed composer Garth Knox. The film had also been gently colourised. I must admit, just ten short minutes in to the film and I was struggling. The music was so insistent; it completely jarred with the action on screen and felt like an utter distraction. I knew I wasn’t going to be able to last the duration.

I will always be grateful for those who painstakingly and lovingly restore classic gems such as this, but I couldn’t get to grips with the orchestration.

Thankfully, the BFI re-release also contains the original version of The Informer. This, I could sink my teeth in to. Sure, it’s a bit scratchy and rough around the edges, but it’s glorious. The music is much tamer and more in keeping with the unfolding events.

What I do love about silent cinema is the glorious facial expressions – thick with stage make up – performed by the actors. Lars Hanson, as the 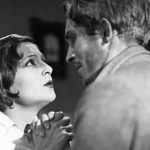 traitorous Gypo Nolan, rolls his eyes, flares his nostrils and smirks with aplomb. By today’s nuanced standards, it’s all incredibly over the top, but it’s wonderful. There is a real sense of ‘putting the character across’.

Robison’s direction pre-dates film-noir but has all the tricks and tells of the genre: Window blinds casting horizontal shadows; men lighting cigarettes by flicking a match off a wall; the claustrophobic sense of space. Nearly all of the shots are mid-range or close up. You feel like you are actually in conversation with the characters.

One particular shot stands out: Robison utilises an achingly long take as he follows Gypo down a crowded street, only coming to a halt because the character has arrived at the door of the police station – where he intends to betray his love rival, Francis.

There are a few times where The Informer seems to shudder and halt, owing to odd changes in pace. It is actually quite a fast-moving film, with frequent shoot outs and car chases being the main driving force behind the action. But a couple of lengthy sequences of dialogue slow this right back down again.

The films length and lack of sound means that relationships and emotions are dense and quickly developed. The plot leaves us, like Phillip and his love interest Katie (Lya de Putti) torn between personal and political loyalty. Capturing the uncertainty of Ireland at the time, no one in the film is entirely innocent – even small acts of defiance can seem morally questionable.

It’s interesting that the film was made so soon after the vast majority of Ireland became a republic – it seems a brave move to make, given that tensions would still have been high. I also love the fact that the cast comes from Hungary, Sweden and Germany (to name a few) – silent cinema truly was an international, boundary-less effort.

While The Informer may not achieve the heady heights of the German Expressionist classics, it is certainly a different type of film to watch and there is power behind the performances and a suspense. It’s definitely one for noir fans.