Few things stir an audience as much as a rousing battle sequence, something evidenced in the gloriously enjoyable The Great Wall, Zhang Yimou’s English language feature debut, sees Matt Damon fights hordes of scaly dragon-like creatures who are threatening to wear down the eponymous wall’s unparalleled defences and sweep across feudal China in a murderous rage. Incredible set design and explosive action sequences pepper a gloriously colourful and inventive 100+ minutes, all the time reminding audiences of the power of a fantastic cinematic battle. Marking The Great Wall’s release, we take a look at some of the best battle scenes out there. Take aim! 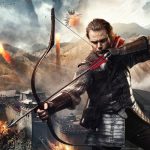 There is a huge amount to admire in The Great Wall, not least of which is the scale and magnificence of the fight sequences. This is never better illustrated than in the triumphant final battle, taking place inside the royal city, as dragon-like alien creatures, telepathically linked to the Queen, threaten to overwhelm a populous woefully under-prepared. Matt Damon, having pitched into the fight against the dragons at the Great Wall of China (following an attack of conscious midway through robbing the place of its gunpowder) jumps onto a hot air balloon and flies to the rescue of the royal city, chasing the Wall’s imperial guard and mastering balloon flight years before Da Vinci had the idea. We cannot tell you how amazing this is. Next, Damon employs a potentially lethal decoy mission to lure the Queen into position, just as a myriad of the scaly green critters eat the upper hand as they gain it. Honestly, a combination of winning production design, inventive creatures and some genuinely thrilling wire work combine to make this an air-punching final battle in a film set to become a classic.

Lord of the Rings: The Two Towers – Battle Of Helm’s Deep 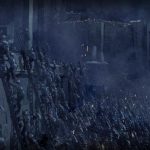 The good guys (including Aragorn (Viggo Mortensen), Legolas (Orlando Bloom) et al, are holed up at Helm’s Deep and the Orc army has arrived. Despite manfully facing up to the challenge, the odds are stacked until a resurgent Gandalf The White (Sir Ian McKellan) shows up with some help. There’s a lot to admire in the Lord Of The Rings Trilogy, as well as a lot that hasn’t aged well (Orlando Bloom surfing on a shield, anyone?) but there is no doubt that the Battle of Helm’s Deep was a game changer in cinematic terms. Lasting for around 40 minutes, the sequence is breathtaking in both scope and scale, providing tiny, human moments and, beat after beat, jaw dropping, sweeping shots that beggar belief. Even if the audience is essentially waiting for the rescue from the off, it’s no less incredible when it comes, with Gandalf cresting a mountain in a shard of light only to usher in thousands of valiant saviours on horseback to turn the tide against what felt like an unstoppable wall of angry green guys. Go! Run, Watch again!

Star Wars Episode VI: Return of the Jedi  – The Battle of Endor 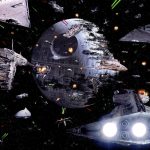 With the second Death Star nearing completion, the Rebel Alliance launches a gutsy three-pronged attack against the Galactic Empire. What the Rebels don’t know is that the Death Star is already operational, and the Emperor has been awaiting their arrival.  Many Star Wars fans have a strong loyalty to the battle on icy Hoth in The Empire Strikes Back, but we prefer the series-ending Endor battle for its rousing underdog charm and non-stop action. Logically, there’s no reason for the Empire’s elite to lose, but who’s keeping track? Do we want the Empire to win? No! This battle scene is a keeper because it continually engages the audience with a trio of compelling story threads. In space, Lando Calrissian and the rest of the Rebel Fleet are scrambling to avoid Death Star hits by dangerously engaging the powerful Imperial ships. On Endor, Han Solo, Chewbacca, and the furry Ewoks are taking on stormtroopers and AT-ST walkers. The most suspenseful moments come from Luke Skywalker’s final showdown with Darth “Dad” Vader and the evil Emperor on board the Death Star, though. 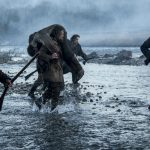 Andrew Henry’s (Domnhall Gleeson) band of early-nineteenth century American fur-trappers are led through unorganised territory by Hugh Glass (Leo DiCaprio) and his half-Pawnee son, Hawk. In the opening scene of The Revenant, Henry’s camp is disastrously and brutally attacked by Arika, a Native American Tribe of North Dakota, whose land has been invaded by Western peoples. The battle between the fur-trappers and the Arika begins with one arrow fired through the back of an escaped American prisoner fleeing towards the riverside campsite. What follows is a truly memorable, show-stopping massacre in which Henry loses the majority of his men at the hands of the Arika tribe. In one graceful, long shot, choreographed beautifully by Alejandro G. Iñárritu and his long time collaborator cinematographer Emmanuel Lubezki, the opening battle sequence flows elegantly from one character to another as each man comes into violent and often gruesome contact with another. The sequence was reportedly rehearsed for an entire month prior to filming due to its complexity. And because Lubezki was committed to using only natural light to shoot the film, the window to capture a scene of this magnitude was extremely small. Should the entire one-shot scene go wrong or lose valuable light, the entire sequence would have to wait another day for just the right light. 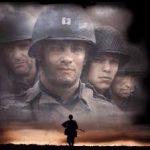 June 6, 1944. Captain John H. Miller (Tom Hanks), Sergeant Michael Horvath (Tom Sizemore) and Private Daniel Jackson (Barry Pepper) are among the Allied forces arriving by sea to Omaha Beach to face the German army. With this merciless and shockingly realistic 24-minute battle, Steven Spielberg proved once again why he’s one of the best. The sounds of crashing waves against the fleets of dedicated (and seasick) soldiers make for a chilling opening of what is arguably the most true-to-life war scene ever filmed. To bring this historical battle scene to life, $11 million was spent on the scene, which features genuine WWII crafts and more than 1,000 extras (among them Irish soldiers). Not content to focus solely on the land elements of the battle, Spielberg also utilized dozens of underwater cameras and fake blood to re-enact the plight of soldiers who were fighting from the water. We’re not alone in naming this battle scene the best. Empire magazine and TV Guide have both recognized it for its gripping visceral qualities and its lasting memories for any viewer who witnesses it. There simply isn’t a signature moment to choose from when the entire scene functions at a level above the rest. It’s all top-notch.

300 – The Battle of Thermopylae 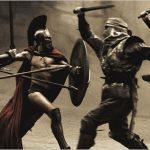 In Sparta, a Persian army of 1 million is expecting to conquer King Leonidas (Gerard Butler) and his 300 Spartans. Their initial fight would be only the first in a gruelling three-day ordeal that still holds strong as a symbol of courage.  After the Persian forces demand their enemies put down their weapons, the Spartans boldly yell, “Come and get them.” What follows is a claustrophobic battle with both sides pushing against each other before Leonidas leads a valiant and bloody onslaught against the Persians. The scene’s calling card is a slow-motion, sword-slicing charge by Leonidas that results in prolific (and stylish) carnage. There’s also a visually arresting cliff-side confrontation that leaves the Persian enemies falling to their deaths. The battle’s ultra-stylized look stays true to Frank Miller’s graphic novel and was accomplished by filming on a Montreal soundstage and digitally adding the backgrounds later.