A furry caper for all the family, Nine Lives takes audiences on a journey of self-discovery, and reminds us all who and what really matters. With an award-winning cast, impressive CGI animation, and feline wit, cat lovers and dog lovers alike will be sure to enjoy this hilarious and heart-warming tale of redemption. We take a look at some of the most purrfect felines to have landed paws-first on the silver screen. 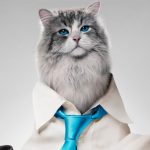 Kevin Spacey plays billionaire businessman Tom Brand; a man who has lost touch with those dearest to him. When an accident sees him magically trapped in the body of his daughter’s new cat, Mr. Fuzzypants, Brand must find a way to reconnect with his family. However, adjusting to his new body is not as easy as it seems and Brand finds himself in a series of hilarious predicaments as he tries desperately to communicate his true identity to his family. In his new role as the family cat, Brand realises how far he’s drifted from his family and offers him an unprecedented opportunity to fix it. 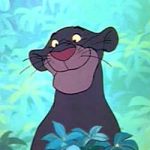 Mowgli’s wise and intelligent guardian, Bagheera, represents all the best traits of cats. Most widely recognisable from Disney’s 1967 animated version and recently re-imagined as CGI in the 2016 live action remake, Bagheera was voiced by Sebastian Cabot and Ben Kingsley respectively. Acting as guide and protector for Mowgli, the infant human child he rescues and helps raise, Bagheera decides that Mowgli is grown enough to return to live with humans, arguing that the forest is not a place for human children and that Mowgli will be better off among his own kind. However, the young Mowgli refuses to listen despite the growing danger he puts himself in by choosing to stay. The Disney classic has captured the hearts of audiences the world over, and Bagheera has served as a guide and protector for not only Mowgli, but the young audiences who fell in love with the film. 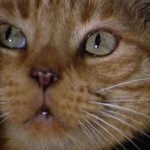 Acting as the ship’s pest control and the crew’s companion, Jonesy is the fluffy Ginger Tom that proves cats really do have nine lives, as he is one of the few characters to survive the horror film Alien. Played by real-life cats, the film franchise’s directors and animal trainers had to come up with creative ways to coax the right reactions out of the cats during filming. In one instance they had the cat react to a German Shepherd in place of the alien when they needed the cat to spit and hiss. Jonesy has become more widely referenced over time, with various appearances across video games including Halo, Aliens: Colonel Marines, and World of Warcraft. Jonesy adds some heart to the cult classic film and has grown to become something of a cultural icon. 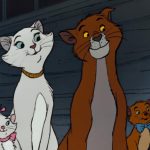 A Disney classic film set in the 1920s, the animated adventure follows a family of aristocratic cats kidnapped by their owner’s butler in the hope of stealing the fortune they are meant to inherit. After being abandoned in the countryside, the family of cats begin to journey home with the aid of an alley cat named Thomas O’Malley, who offers to guide them to Paris. Along the way they meet O’Malley’s friend Scat Cat, the trumpet playing leader of a feline jazz band. The aristocats find their way home, but are intercepted by the butler once again who attempts to ship them off to Timbuktu. O’Malley manages to rescue them and is then adopted into the family by Madame Adelaide. This feline family adventure is a fun adventure through jazz-era Paris. 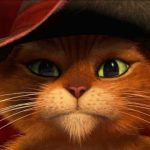 Everyone’s favourite feline trickster, Puss in Boots is rooted in an old Italian fairy tale about a low born cat who uses trickery and wit to gain power and wealth. Popularised by the animated film franchise Shrek, Puss offers his aid to Shrek as he pursues his true love, Fiona, against the forces that seek to tear the two apart. The character of Puss is most recently voiced by Antonio Banderas in the Dreamworks animation production Puss in Boots, a prequel spin-off of Shrek. The character has captured the imagination of many artists since the tale was first written and has been re-imagined in numerous books, films, and television series across multiple languages over the decades. 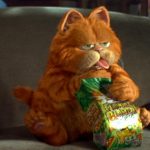 Originating from a 1970s American comic strip, Garfield has become a well-known cultural icon. Notorious for being a lazy, coffee-drinking, well-fed house cat who hates Mondays, he made his silver screen debut in the 2004 CGI adventure Garfield: The Movie. The film adapts many of the comic strip characters and follows Garfield as he struggles to adjust to new houseguest and stray dog, Odie, whom he cannot stand. When Odie gains fame at a dog-show competition, Garfield reacts out of jealousy and locks Odie out of the house causing him to run away. But when Garfield discovers Odie has been kidnapped, he puts aside his dislike for the dog and sets out on a rescue mission. The well-loved and widely syndicated comic strip is still running today.